Jerome Delay is AP’s chief photographer for Africa, based in Johannesburg. After working as an AP stringer in Denver, Colorado and as a staff photographer for Agence France-Presse (AFP) in Washington, DC, Delay has been on staff with the AP in a variety of roles: chief photographer in Jerusalem, staff photographer and international photo editor in Paris and international photographer based in London and in Paris. He has covered the White House, the Calgary Winter Olympics and World Cup soccer, as well as conflicts all over the world: the Middle East (Israel, Palestine, South Lebanon, Iraq), Africa (Somalia, Ethiopia, Rwanda, the Congo), the Balkans (Bosnia, Kosovo, Albania, Macedonia, Serbia), Northern Ireland, Haiti, Kashmir and Afghanistan.

An anti-Balaka Christian militiaman holding a bow and arrow stands in, what days before, was a predominantly Muslim area of the Miskin district of Bangui, Central African Republic, Tuesday Feb. 4, 2014. All Muslim shops on the avenue leading to PK5 have been looted in the past 2 days, as anti-Balaka militiamen push back Muslim factions, opening the gates for mass looting by Christian residents. Fighting between Muslim Seleka militias and Christian anti-Balaka factions continues as French and African Union forces struggle to contain the bloodshed. (AP Photo/Jerome Delay)

Peul women sit in a house across the Nour Islam mosque where they found refuge in Bangui, Central African Republic, Wednesday, Dec. 11, 2013. More than 500 people have been killed over the past week in sectarian fighting in Central African Republic, aid officials said Tuesday, as France reported that gunmen fatally shot two of its soldiers who were part of the intervention to disarm thousands of rebels accused of attacking civilians. (AP Photo/Jerome Delay)

Children swimming in a river near the Central African village of Bobangui, some 50 mms (30 miles) south-west of the capital Bangui, in an area controlled by anti Balaka Christian militias, wave and smile at the photographer on Sunday Jan. 26, 2014. Thousands of African and French peacekeepers have been unable to stop mounting sectarian attacks between Christian and Muslim militias and civilians. (AP Photo/Jerome Delay)

A Congolese child sits in the Kiwanja catholic church, North of Rutshuru, 75 km (48 miles) North of Goma, Congo, Sunday Aug. 5, 2012. 2012. Congo’s army now controls only the city of Goma and the village of Kibumba, 10 kilometers (six miles) outside Goma. Now the rebels hold all towns going north as far as Rutshuru and are threatening to besiege Goma. The U.N. Security Council on Thursday demanded that the M23 rebel group halt any advances toward Goma. (AP Photo/Jerome Delay) 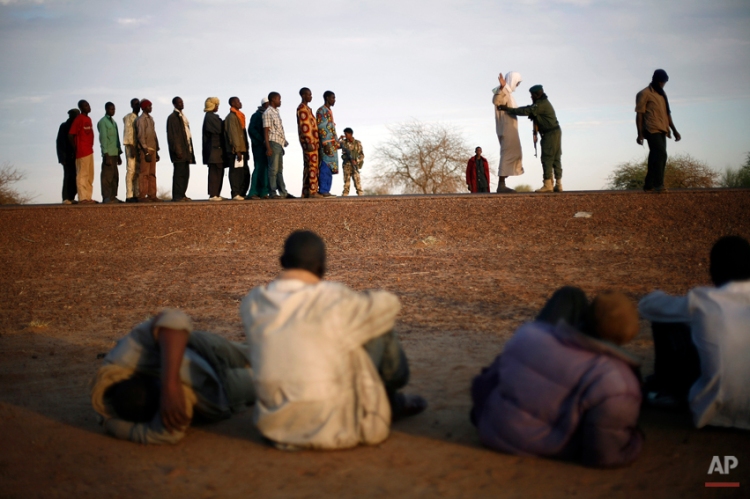 Travelers driving from Niamey, Niger, line up to be searched at the entrance of Gao, northern Mali, Tuesday, Feb. 12, 2013. Soldiers from Niger and Mali patrolled downtown Gao on foot Tuesday, combing the sand footpaths through empty market stalls to prevent radical Islamic fighters from returning to this embattled city in northern Mali. (AP Photo/Jerome Delay) 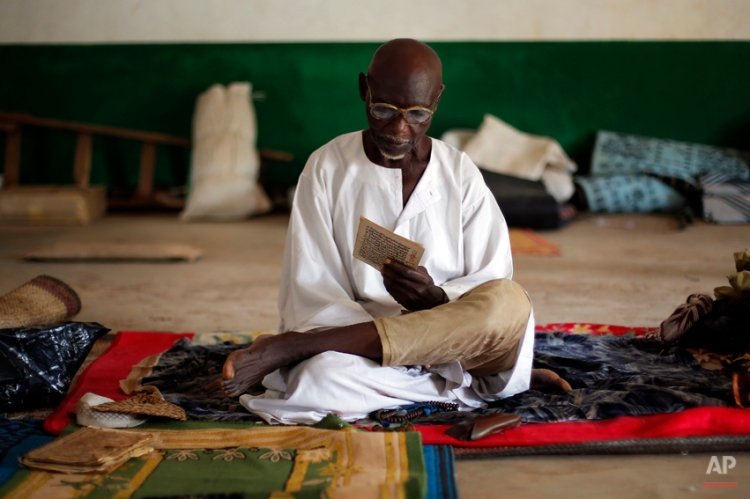 Marabou Husein Aba Ali reads prayers at the mosque at PK12, the last checkpoint at the exit of the town, Tuesday Feb. 11, 2014, where he and 3500 other Muslims have sought refuge from sectarian violence, awaiting for transport from Bangui, Central African Republic, to neighboring Chad. (AP Photo/Jerome Delay) 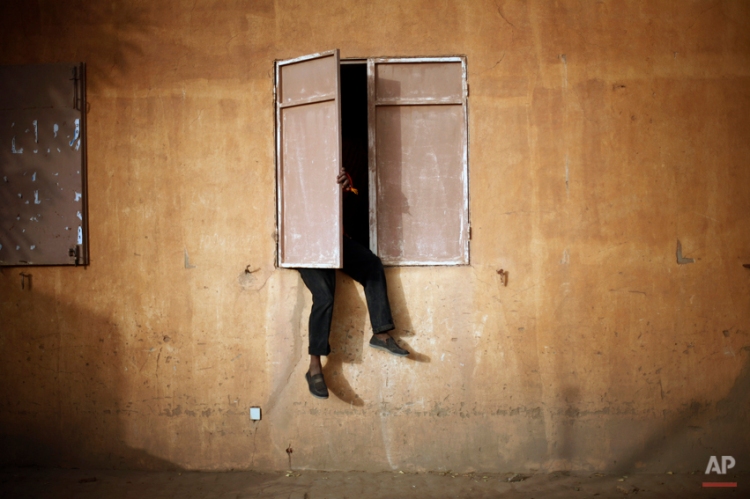 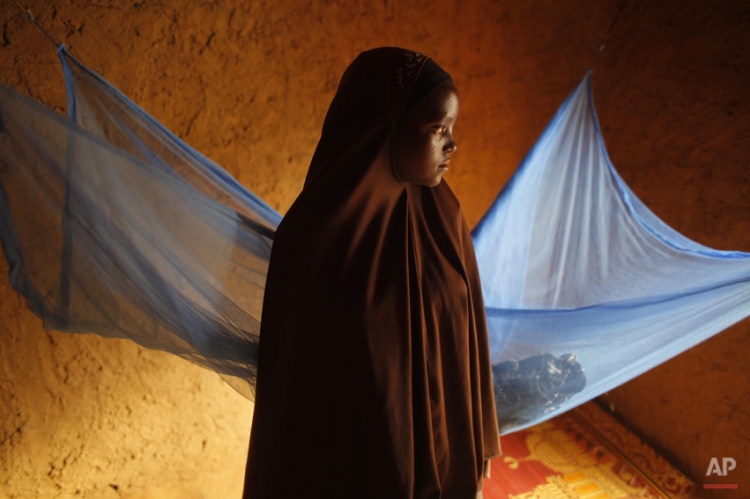 In this picture taken Wednesday, July 18, 2012, Zali Idy, 12, poses in her bedroom in the remote village of Hawkantaki, Niger. Zali was married in 2011. In January 2012, soon after she turned 12, she was carried on a bullock cart to her 23-year-old husband’s home. Even during the best of times, one out of every three girls in Niger marries before her 15th birthday, a rate of child marriage among the highest in the world, according to a UNICEF survey. Now this custom is being layered on top of a crisis. At times of severe drought, parents pushed to the wall by poverty and hunger are marrying their daughters at even younger ages. A girl married off is one less mouth to feed, and the dowry money she brings in goes to feed others. (AP Photo/Jerome Delay)

In this eight-photos combo, Anti-Balaka Christian militiamen pose for a portrait outside Central African Republic’s capital Bangui, Sunday Dec. 15, 2013. The leader of the Christian militia says his fighters won’t put down their rebellion until President Michel Djotodia is gone from power, raising the specter of a prolonged sectarian conflict in the country.More than 600 people have been killed since Anti-Balaka launched a strike over Bangui last week before being pushed back. (AP Photo/Jerome Delay)

Lead Image Caption: A Malian man dressed in green walks between green doors of closed shops in Gao, northern Mali, Tuesday Feb. 5, 2013. Troops from France and Chad moved into Kidal in an effort to secure the strategic north Malian city, a French official said Tuesday, as the international force put further pressure on the Islamic extremists to push them out of their last major bastion of control in the north.(AP Photo/Jerome Delay)

About AP Images: AP Images is the world’s largest collection of historical and contemporary photos. AP Images provides instant access to AP’s iconic photos and adds new content every minute of every day from every corner of the world, making it an essential source of photos and graphics for professional image buyers and commercial customers. Whether your needs are for editorial, commercial, or personal use, AP Images has the content and the expert sales team to fulfill your image requirements. Visit apimages.com to learn more.