Maya Angelou, a modern Renaissance woman who survived the harshest of childhoods to become a force on stage, screen, the printed page and the inaugural dais, has died. She was 86. Her death was confirmed in a statement issued by Wake Forest University in Winston-Salem, North Carolina, where she had served as a professor of American Studies since 1982. Tall and regal, with a deep, majestic voice, Angelou defied all probability and category, becoming one of the first black women to enjoy mainstream success as an author and thriving in virtually every artistic medium. The young single mother who performed at strip clubs to earn a living later wrote and recited the most popular presidential inaugural poem in history. The childhood victim of rape wrote a million-selling memoir, befriended Malcolm X, Nelson Mandela and the Rev. Martin Luther King, Jr., and performed on stages around the world. 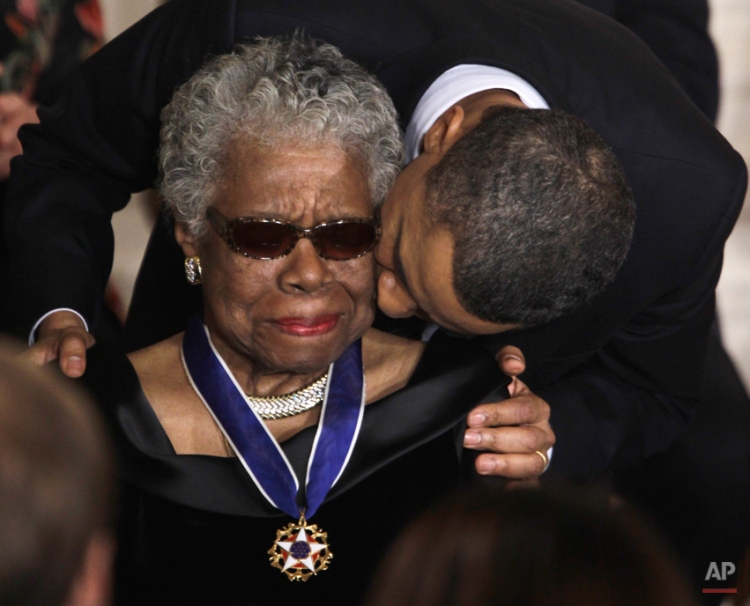 In this Feb. 15, 2011 photo, President Barack Obama kisses author and poet Maya Angelou after awarding her the 2010 Medal of Freedom during a ceremony in the East Room of the White House in Washington. Angelou, author of “I Know Why the Caged Bird Sings,” has died, Wake Forest University said Wednesday, May 28, 2014. She was 86. (AP Photo/Charles Dharapak)

Maya Angelou, left, and Oprah Winfrey share laughs during a star-studded double-taping of “Surprise Oprah! A Farewell Spectacular,” Tuesday, May 17, 2011, in Chicago. “The Oprah Winfrey Show” is ending its run May 25, after 25 years, and millions of her fans around the globe are waiting to see how she will close out a show that spawned a media empire. (AP Photo/Charles Rex Arbogast)

Poet Dr. Maya Angelou speaks during a memorial service for Betty Shabazz at Riverside Church in the Harlem section of New York Sunday, June 29, 1997. The widow of Malcolm X died last Monday, nearly a month after she was burned in a fire at her home. More than 2,000 of Mrs. Shabazz’s friends, relatives and admirers paid a buoyant and affectionate tribute to her Sunday. (AP Photo/Emile Wamsteker)

Maya Angelou, poet in residence at Wake Forest University, talks about the poem she wrote for President Clinton’s inauguration from her office in Winston-Salem, N.C., Sept. 16, 1996. Angelou will narrate the poem to music Saturday at the school. (AP Photo/Chuck Burton)

Lead Image Caption: In this Nov. 21, 2008 photo, poet Maya Angelou smiles at an event in Washington. Angelou, author of “I Know Why the Caged Bird Sings,” has died, Wake Forest University said Wednesday, May 28, 2014.  She was 86.  (AP Photo/Gerald Herbert)

About AP Images: AP Images is the world’s largest collection of historical and contemporary photos. AP Images provides instant access to AP’s iconic photos and adds new content every minute of every day from every corner of the world, making it an essential source of photos and graphics for professional image buyers and commercial customers. Whether your needs are for editorial, commercial, or personal use, AP Images has the content and the expert sales team to fulfill your image requirements. Visit apimages.com to learn more.

To see a collection of images of Maya Angelou, click here.