Gene Puskar, a staff photographer based in Pittsburgh, has worked for The Associated Press for more than 35 years. He first started covering the Little League World Series in the mid-1980s and continues to do so today. As the 2014 tournament made its way to Williamsport, Pennsylvania late last week, we asked Gene about some of his all-time favorite Little League World Series images he has taken.

Below are Gene’s comments accompanied with his image selections.

“At the Little League World Series emotion is everywhere, unlike in the professional leagues. This photo shows the end of a game with a player from the losing team walking back to the dugout while the volunteer umpire does his best “out” call for the ESPN cameras in the background.”

“As the saying goes in baseball, sometimes you win, sometimes you lose and sometimes it rains. And when it rains at the Little League World Series the fun REALLY begins on the hill overlooking Lamade Stadium. With no action on the field, the crowds take to the muddy hill where sliding in mud brings out the kid in us all.”

“Shooting action from the roof of Lamade Stadium is always fun, since it’s not possible in the pros, except in a stadiums like in Milwaukee and Toronto that have catwalks above their fields. This was the first inning of the second game played at the LLWS this year. The leaping start of a futile slide by a player from Chicago made this shot. Chicago won 12-2.”

“Shooting Little League baseball offers me a chance to get much closer to the action than I can when confined to the photo positions I shoot from while covering the Pittsburgh Pirates. Nice outfield action is always a welcome diversion from the usual hitters hitting, pitchers pitching and base runners running. This is a nicely lit photo that captures the peak action of the moment with the left fielder leaping for the ball that just tips off the end of his glove.” 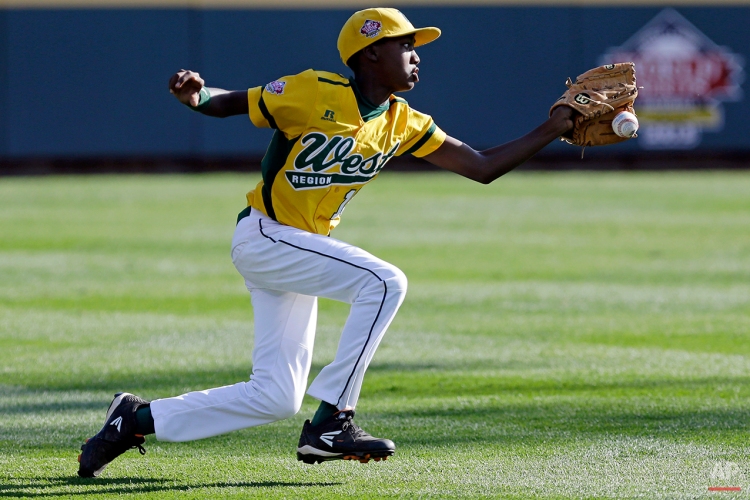 “Winning a Little League baseball game is fun. And when you win on the biggest stage in the world, televised by ESPN, the winning is especially fun. So, as with dejection, expressions of jubilation are magnified at the LLWS.” 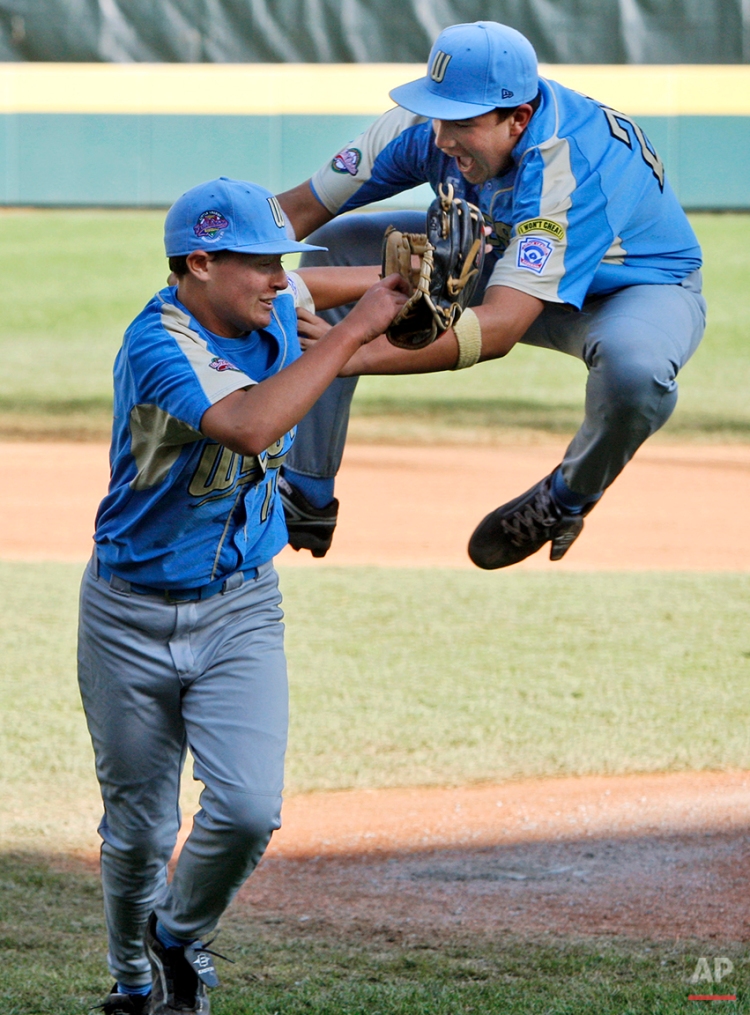 Lead Image Caption: Rapid City base runner Bridger Nesbit, center, runs around Lynnwood catcher Robley Corsi III, left, and is called out by umpire Carlos Rodriguez Jr., right, for being out of the baseline for the final out of a baseball game at the Little League World Series tournament in South Williamsport, Pa., Saturday, Aug. 16, 2014. Lynnwood won 7-5. (AP Photo/Gene J. Puskar)