In this Friday, Aug. 29, 2014 photo, a teenage girl from the Santa Marta “favela” slum exits a police car as she takes the hand of an officer who patrols her neighborhood, as she arrives to Copacabana for a group debutante ball organized by her slum’s Pacifying Police Unit in Rio de Janeiro, Brazil. The ball, which relied on volunteers who coiffed and made up the girls and a formal wear shop that loaned the dresses, helped build goodwill between pacified favelas’ residents and the officers who patrol them. (AP Photo/Silvia Izquierdo) License this photo

The 15-year-old girls were escorted to the ball held in a Copacabana dancehall Friday night, August 29, 2014, by members of the Pacifying Police Unit from their community. The police units have re-conquered slums ruled for decades by drug-dealing gangs.

The girls were coiffed and made up by volunteers, and their dresses were loaned by a formal wear shop.

Teenage girls from the Santa Marta “favela” slum prepare for their group debutante ball organized by the Pacifying Police Unit from their neighborhood in Rio de Janeiro, Brazil, Friday, Aug. 29, 2014. All of the debutantes turned 15 this year, but few had the means to celebrate the milestone with one of the lavish blowouts that are de rigueur among wealthier Brazilians. (AP Photo/Silvia Izquierdo) License this photo

Debutante balls have been a custom among upper-middle-class and wealthy Brazilian families. They mark a girl’s transition from childhood to adulthood. 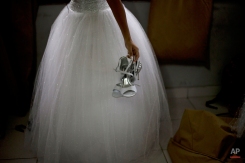 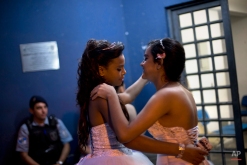 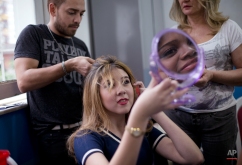 Lead Image Caption: Jaqueline, right, and Monique take a selfie before their debutante ball organized by the Pacifying Police Unit from their neighborhood, the Santa Marta “favela” slum, in Rio de Janeiro, Brazil, Friday, Aug. 29, 2014. Fifteen-year-olds from Santa Marta made their coming out Friday night, escorted by police officers who patrol their communities. (AP Photo/Silvia Izquierdo)

AP Images is the world’s largest collection of historical and contemporary photos. AP Images provides instant access to AP’s iconic photos and adds new content every minute of every day from every corner of the world, making it an essential source of photos and graphics for professional image buyers and commercial customers. Whether your needs are for editorial, commercial, or personal use, AP Images has the content and the expert sales team to fulfill your image requirements. Visit apimages.com to learn more.

2 thoughts on “Fairy-Tale Night In A Favela”