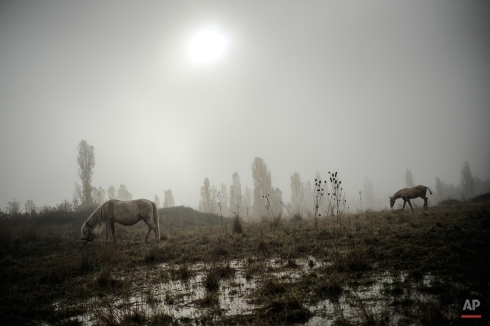 A foal, right, walks on the land next to a mare as fog covers the landscape on an autumn sunrise in Ezquiroz, near to Pamplona northern Spain, Tuesday, Nov. 18, 2014. The autumn season paints the landscape with his brilliant colors and make a special atmosphere with the fog. (AP Photo/Alvaro Barrientos) 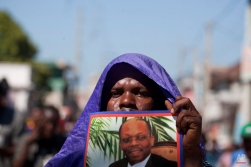 Syrian Kurdish refugee children from the Kobani area speak after receiving food rations in front of living quarters separated by plastic sheets at a camp in Suruc, on the Turkey-Syria border Tuesday, Nov. 18, 2014. Kobani, also known as Ayn Arab, and its surrounding areas, has been under assault by extremists of the Islamic State group since mid-September and is being defended by Kurdish fighters. (AP Photo/Vadim Ghirda)

Two youths look at bullet holes and forensic evidence inside a synagogue after an attack in Jerusalem, Tuesday, Nov. 18, 2014. Two Palestinians stormed a Jerusalem synagogue on Tuesday, attacking worshippers praying inside with knives, axes and guns, and killing four people before they were killed in a shootout with police, officials said. (AP Photo/Ariel Schalit)

A group of female spectators leave as another group follows a debate of the Iranian parliament on a vote of confidence for nominee for the post of science minister Fakhroddin Ahamadi Danesh Ashtiani proposed by the President Hassan Rouhani, in Tehran, Iran, Tuesday, Nov. 18, 2014. Iran’s parliament rejected Rouhani’s nominee for the post of science minister over his pro-reform tendencies. In October the parliament rejected Mahmoud Nili Ahmadabadi, another nominee for the same post; the same body dismissed former-Science Minister Reza Faraji Dana in August over similar allegations. (AP Photo/Vahid Salemi)

Workers start clearing away barricades at an occupied area outside government headquarters in Hong Kong Tuesday, Nov. 18, 2014. The removal comes after a Hong Kong court granted a restraining order against the protesters last week requiring them to clear the area in front of a tower in the central part of Hong Kong as well a separate order against a second protest site Mong Kok brought by taxi and minibus operators. (AP Photo/Vincent Yu)

A mailman carries mail through a patch of setting sunlight outside of a corner market, Tuesday, Nov. 18, 2014, in Baltimore, where temperatures hovered around freezing most of the day. Maryland fared better than other states Tuesday when a wintry blast that included bitter cold in spots created havoc across a wide swath of the country. (AP Photo/Patrick Semansky)