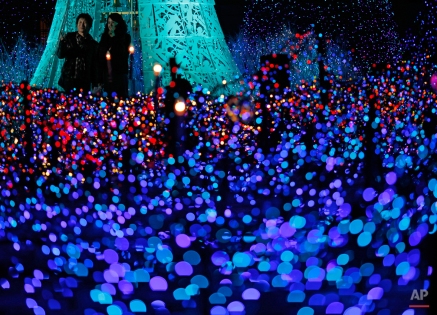 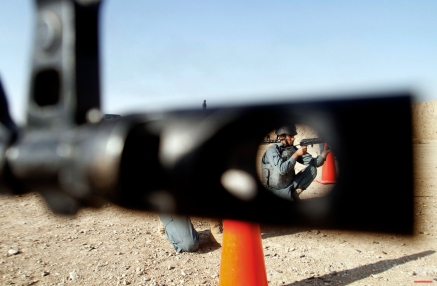 Afghan police demonstrate their skills during their graduation ceremony at a training center in Kandahar, south of Kabul, Afghanistan, Tuesday, Nov. 25, 2014. Over 214 police graduated after four months of training in Kandahar. (AP Photo/Allauddin Khan) 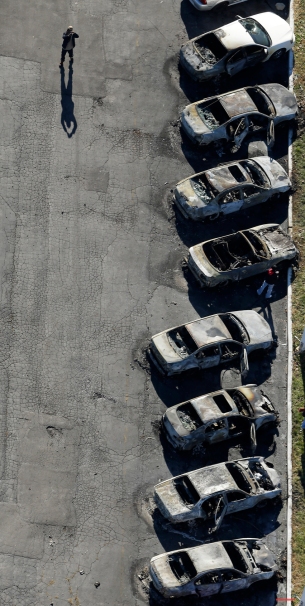 In this aerial photo, person takes photos of a row of charred cars at a used car dealership Tuesday, Nov. 25, 2014, in Dellwood, Mo., after they were burned in overnight protests following a grand jury’s decision not to indict a white police officer in the killing of unarmed black 18-year-old Michael Brown. Monday night’s protests were far more destructive than any of those that followed Brown’s Aug. 9 death, with more than a dozen businesses badly damaged or destroyed. (AP Photo/Charlie Riedel) 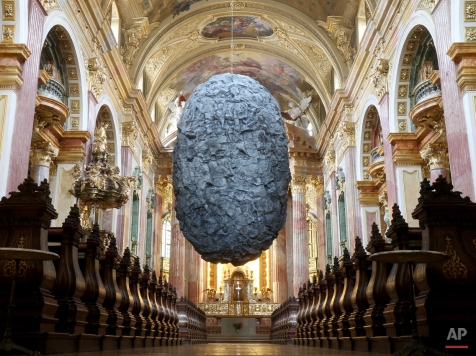 A boulder plastic made of synthetic material called “To be in Limbo hangs from the ceiling of the 20 meter high Jesuit Church in Vienna, Austria, Tuesday, Nov. 25, 2014. The eight meter high, hollow and 700 kilogram heavy sculpture from the artists group Steinbrener/Dempf and Huber is supposed to symbolize faith and its threatening moments. The installation will remain until April 19, 2015 and then move to a church in Hamburg, Germany. (AP Photo/Ronald Zak) 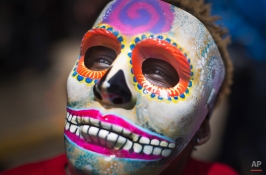 A female protester wears a mask as she joins others to carry mock coffins and red-painted crosses, symbolizing the blood of the 28 non-Muslims singled out and killed in the recent attack on a bus in Mandera by Somali militant group al-Shabab, outside government offices in downtown Nairobi, Kenya Tuesday, Nov. 25, 2014. Demonstrators carried mock coffins and red-painted crosses in Nairobi on Tuesday, a vivid protest demanding the government provide more effective security for ordinary Kenyans and a memorial for the hundreds of Kenyans killed in recent terror attacks, as pressure builds on the government to halt a steady onslaught of gunfire and grenade assaults. (AP Photo/Ben Curtis) 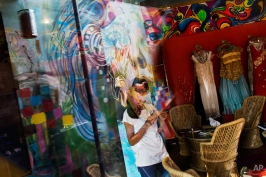 Acid attack survivor Ritu, 22, pauses inside Sheroes Hangout cafe, managed by five acid attack survivors under an initiative by Stop Acid Attacks and Channv Foundation, in Agra, India, Tuesday, Nov. 25, 2014. Ritu, who was attacked by her cousin during a property dispute, is looking after the library here. The “Pay as you Wish” cafe is a crowd-funded project that started on Oct. 19. India passed a law last year severely limiting sales of acid, but Stop Acid Attacks said it has since counted at least 200 attacks. (AP Photo/Bernat Armangue)