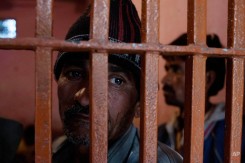 A guard stands in front of the Monaco Palace after the announcement of the birth of Monaco royal twins Gabriella Therese Marie and Jacques Honore Rainier at the Palace in Monaco, Thursday, Dec. 11, 2014. For the first time since Monaco was founded in the 13th century, its royal family gave birth to twins on Wednesday, and dozens of cannons were fired to celebrate. Monaco’s Princess Charlene had a girl first and a boy second, but the boy will be the principality’s future ruler, reflecting the male priority of Monaco’s laws of succession. (AP Photo/Lionel Cironneau)

Protesters laying down while locking arms each other confront police officers at the occupied area outside government headquarters in Hong Kong Thursday, Dec. 11, 2014. Hong Kong police on Thursday took away demonstrators who refused to leave the main pro-democracy protest camp and tore down their tents in a final push to retake streets occupied by activists for two and a half months. (AP Photo/Kin Cheung)

A surfer rides a huge wave during a tow-in surfing session at the Praia do Norte or North beach, in Nazare, Portugal, Thursday, Dec, 11, 2014. The beach has become a famous break point for big waves riders around the world. (AP Photo/Francisco Seco)