Matilde Apioas, 66, weeps in front of the dock while waiting for news of her son, a diver disappeared during the shipwreck, in the Caribbean port of Puerto Cabezas, also known as Bilwi, Nicaragua, Sunday Dec. 14, 2104. Rescue crews have found the fishing boat that capsized last week with 50 people aboard and are still searching for crew members who remain missing, authorities said Sunday. (AP Photo/Esteban Felix) 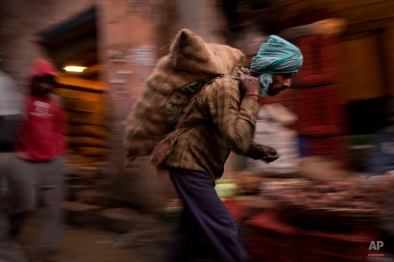 An Indian laborer carries a sack full of vegetables at a wholesale vegetable market in old parts of New Delhi, India, Monday, Dec. 15, 2014. Old Delhi despite of being extremely crowded and dilapidated still serves as the symbolic heart of the city. (AP Photo/Bernat Armangue)

A girl sits under an art installation depicting a gorilla entitled ‘Silver Back’ by artist David Mach, as she poses for the photographers during a press preview of a themed auction that features the animal as artistic inspiration, entitled ‘Creatures Great and Small’, in London, Monday, Dec. 15, 2014. The two-meter tall gorilla by the Turner Prize nominated artist is the third of an edition of three, the first of which holds the Guinness World Record for the largest art installation made entirely from coat hangers. The sale scheduled for Dec. 17, 2014, explores animals across a diverse range of mediums and styles, from intricate carving details in 19th century furniture through to contemporary sculpture, according to Christie’s auction house. (AP Photo/Lefteris Pitarakis)

A man stands by tombstones carrying names of Romanian military personnel killed in fighting around the Otopeni airport during the anticommunist uprising 25 years ago, outside Bucharest, Romania, Monday, Dec. 15, 2014. The uprising, which left more than thousands dead, and ended the rule of dictator Nicolae Ceausescu, who was executed, started in the western Romanian town of Timisoara on Dec. 16, 1989. (AP Photo/Vadim Ghirda)

Plain clothed police officers detain a man who was trying to set up a tent to mourn and commemorate the fighters killed in Syrian city of Ayn al-Arab or Kobani, in southern Turkish city of Adana, Turkey, Monday, Dec. 15, 2014. (AP Photo/Hurriyet) 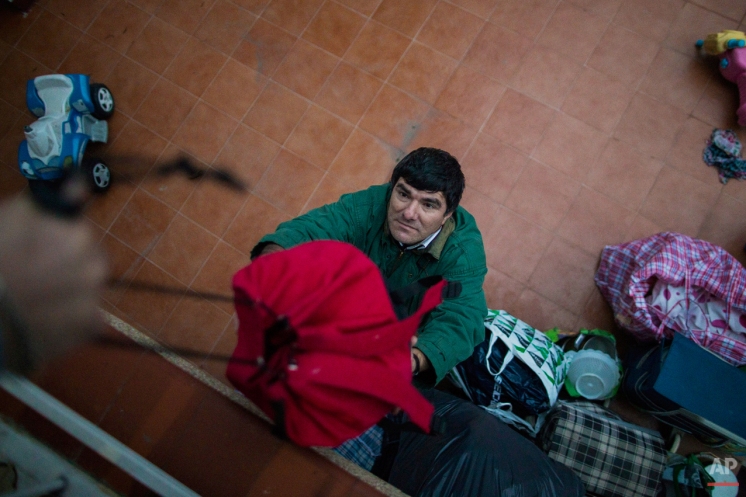 Aristides Apolo, 58 years old and unemployed, passes his belongings to his friend, Israel Plaza, as he prepares to leave after the police surrounded the apartment to evict him and his partner, in Madrid, Spain, Monday, Dec. 15, 2014. The landlord’s loss of the apartment to a Bankia bank caused Apolo and his partner Mercedes Pincay’s eviction. Apolo, lived with 50 year old Pincay, in a foreclosed apartment that was owned by her sister who stopped paying her mortgage fees. Pincay and Apolo remained in the apartment as they could not afford to pay rent due to their financial situation as well as health issues as Pincay is recovering from breast cancer. The eviction was carried out. (AP Photo/Andres Kudacki)