For this installment of Worldview: Daily Life, we focus on Christmas celebrations around the world.

From a Brazilian subway car packed with Santa and his elves, to a dizzying slow shutter photo of the big wheel in Paris, to a candlelit rehearsal of St Paul’s Choristers in London, our photographers capture Christmas traditions in everyday life.

Click on any image to launch the Worldview: Christmas Around the Globe gallery.

St. Paul’s Choristers rehearse in the cathedral in London, Monday, Dec. 22, 2014, preparing for their busiest days of the year. (AP Photo/Kirsty Wigglesworth)

A man dressed as Santa Claus walks on the wall of the Old City in Jerusalem Monday, Dec. 22, 2014. (AP Photo/Dusan Vranic) 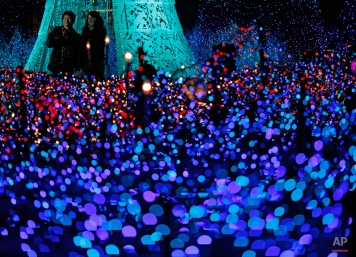 Around 250 people dressed in Santa Claus costumes pose for photographers before a parade in the streets of Vallauris, southeastern France, Saturday, Dec. 20, 2014. (AP Photo/Lionel Cironneau)

The capitol is reflected in an ornament on the state Christmas tree Thursday, Dec. 18, 2014, in Nashville, Tenn. (AP Photo/Mark Humphrey) 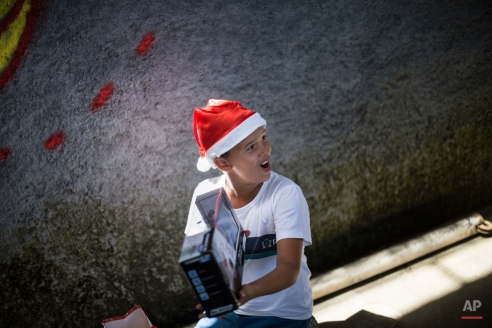 Carlos Eduardo, 8, reacts after getting a remote control helicopter from Santa, exactly what he had asked for in a letter he wrote to Santa and put in the mail, at his school in Rio de Janeiro, Brazil, Wednesday, Dec. 17, 2014. Eduardo said he asked Santa because he knew his parents couldn’t afford one. Brazil’s postal service organized a visit from Santa as part of their campaign to respond to letters from children addressed to Santa that they find in the mail. (AP Photo/Felipe Dana) 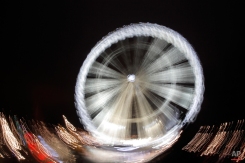 In this photo taken with a slow shutter speed, the big wheel is illuminated as part of Christmas lights on the Champs Elysees, in Paris, Thursday, Dec. 4, 2014. (AP Photo/Francois Mori)

A woman makes an arrangement with Christmas decorations in what used to be a shop window in her house in Amsterdam, Netherlands, Monday, Dec. 8, 2014. (AP Photo/Peter Dejong)

An Aymara indigenous woman carries her pet to a Christmas costume contest for dogs in El Alto, Bolivia, Saturday, Dec. 20, 2014. About 50 dogs participated in the event organized by zoonosis. (AP Photo/Juan Karita)

A man uses a smartphone to take pictures of light installation at a shopping mall for the Christmas season in Beijing, China Sunday, Dec. 7, 2014. (AP Photo/Andy Wong) 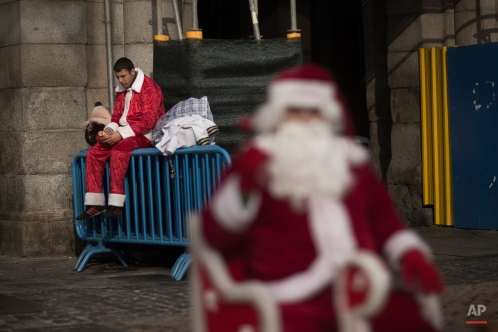 A man who performs for money wearing a Santa Claus outfit eats a sandwich as he takes a break at the Madrid’s Christmas market in Madrid, Spain, Saturday, Dec. 13, 2014. (AP Photo/Andres Kudacki)

A man portraying Santa Claus moves between cars while greeting passengers during a Polar Express holiday train ride to the “North Pole” on the Maine Narrow Gauge Railroad, Friday, Dec. 19, 2014, in Portland, Maine. The Polar Express is the largest annual fundraiser for the railroad’s museum. (AP Photo/Robert F. Bukaty)

A woman dressed as an elf gestures to children waiting to meet Santa Claus in a Christmas village set up in the medieval castle of Obidos, central Portugal, Wednesday, Dec. 17, 2014. (AP Photo/Francisco Seco)

Zoo owner Manny Tangco displays pythons behind an orangutan named “Pacquiao” while giving school children a tour ahead of the next week’s Christmas celebration Thursday, Dec. 18, 2014 in suburban Malabon city, north of Manila, Philippines. The yearly treat is aimed at encouraging residents to be sensitive to the feelings of animals especially when exploding firecrackers for the raucous celebration. (AP Photo/Bullit Marquez)

A Filipino boy walks past Christmas decorations for sale in Manila, Philippines on Monday, Dec. 22, 2014. Christmas is one of the most important holidays in this predominantly Roman Catholic nation. (AP Photo/Aaron Favila)