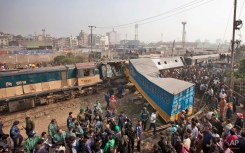 Bangladeshi people gather after a lorry rammed into a passenger train in Dhaka, Bangladesh, Monday, Dec. 29, 2014. A several persons were killed and more than 20 others were injured in the accident Monday, according to local reports. (AP Photo/Suvra Kanti Das) 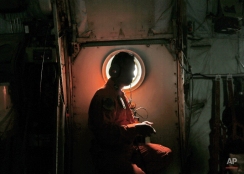 A crew of an Indonesian Air Force C-130 airplane of the 31st Air Squadron is silhouetted by the light from the window during a search operation for the missing AirAsia flight 8501 jetliner over the waters of Karimata Strait in Indonesia, Monday, Dec. 29, 2014. The Airbus A320-200 vanished Sunday morning in airspace thick with storm clouds on its way from Surabaya, Indonesia, to Singapore. (AP Photo/Dita Alangkara)

A boy walks behind an ice wall, at the annual ice sculpture festival in Bruges, western Belgium, Monday, Dec. 29, 2014. This year’s theme is titled ‘the Land of the Hobs’, and takes visitors into the mythology of dwarves, elves, fairies, hunters, magicians and devilish figures. (AP Photo/Yves Logghe)

Afghan refugee girls sit on the ground attend a class to learn how to read and write the alphabet at a makeshift school in the outskirts of Islamabad, Pakistan, Monday, Dec. 29, 2014. (AP Photo/Muhammed Muheisen) 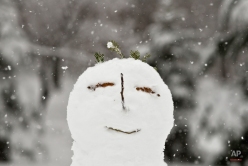 A snowman made by children is backdropped by trees covered in snow in a park in Bucharest, Romania, Monday, Dec. 29, 2014. Romania, especially the eastern part, is affected by heavy snow falls and blizzards this year that cause traffic disruptions but are enjoyed by children and mountain tourists. (AP Photo/Vadim Ghirda)

Rosa Caceres, 52, the wife of a former worker of Unicom, a Paraguayan Itaipu Dam contractor, lies on a wooden cross in a symbolic crucifixion in front of the Brazilian Embassy in Asuncion, Paraguay, Monday, Dec. 29, 2014. Caceres is part of a group that for the last 25 years, after the construction on the dam was completed, is demanding compensation benefits from the contractor. The Itaipu hydroelectric dam on the Parana River straddles the Brazil-Paraguay border. (AP Photo/Jorge Saenz)

A man prays during a ceremony in honor of Iemanja, goddess of the sea, at Copacabana beach, in Rio de Janeiro, Brazil, Monday, Dec. 29, 2014. As the year winds down, Brazilian worshippers of Iemanja celebrate the deity, offerings flowers and launching boats, large and small, into the ocean in exchange for blessings in the coming year. The belief in the goddess comes from the African Yoruban religion brought to America by West African slaves. (AP Photo/Felipe Dana)