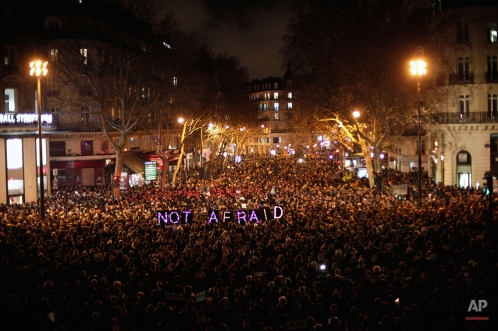 People gather to pay respect for the victims of a terror attack against a satirical newspaper, in Paris, Wednesday, Jan. 7, 2015. Masked gunmen shouting “Allahu akbar!” stormed the Paris offices of a satirical newspaper Wednesday, killing 12 people, including the paper’s editor, before escaping in a getaway car. It was France’s deadliest terror attack in living memory. (AP Photo/Thibault Camus)

Waves off Lake Erie crash on the ice-covered shore west of downtown Cleveland, Wednesday, Jan. 7, 2015. A blast of arctic air is expected to stick around Ohio a few more days into at least the early part of the weekend and wind chills already reported below zero in some areas could dip as low as 25 to 30 degrees below. (AP Photo/Mark Duncan)

A Syrian boy looks out through his tent door covered in snow at a refugee camp in Deir Zannoun village, in the Bekaa valley, east Lebanon, Wednesday, Jan. 7, 2015. While the storm disrupted life for everyone, it proved particularly trying for the hundreds of thousands of Syrian refugees who live in tents and makeshift shelters in the Bekaa. The storm dumped rain and hail on Lebanonís coast and heavy snows in the mountains and central Bekaa Valley, where gas stations, banks, schools and most shops closed. (AP Photo/Hussein Malla)

Two attendees look at their smartphones while getting their teeth whitened at the BleachBright booth at the International CES, Wednesday, Jan. 7, 2015, in Las Vegas. (AP Photo/Jae C. Hong) 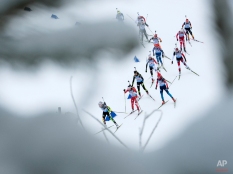 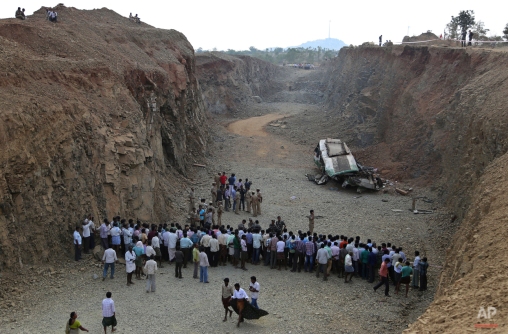 People stand behind a police cordon near the wreckage of a bus that fell into a gorge in Penukonda, about 145 kilometers north of Bangalore, India, Wednesday, Jan. 7, 2015. The passenger bus veered off a road in southeastern India and fell into the gorge on Wednesday, killing at least 16 people, most of them college and middle school students, police said. More than 50 other people were injured in the accident. (AP Photo/Aijaz Rahi)

An injured male leopard takes shelter in the bedroom of a residential complex in Gauhati, India, Wednesday, Jan. 7, 2015. According to a veterinarian, the leopard, seriously injured after being ensnared by an iron cable, was tranquilized by forest officials and transported to the state zoological park. Due to habitat loss, leopards sometimes enter populated areas in search of food. (AP Photo/ Anupam Nath) 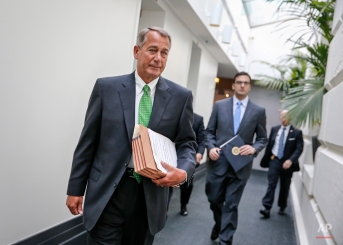