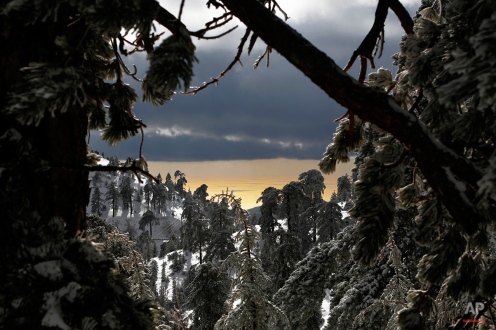 The view of the sea near the coastal city of Limassol is seen in the background through the fir trees after four-days of heavy snow on Troodos mountain, in Cyprus, Thursday, Jan. 8, 2015. Cyprus is in the grip of a mid-winter storm bringing heavy rains, low temperatures and snow in the Troodos mountain range. (AP Photo/Petros Karadjias)

French riot officers patrol in Longpont, north of Paris, France, Thursday, Jan. 8, 2015. Scattered gunfire and explosions shook France on Thursday as its frightened yet defiant citizens held a day of mourning for 12 people slain at a Paris newspaper. French police hunted down the two heavily armed brothers suspected in the massacre to make sure they don’t strike again. (AP Photo/Thibault Camus) 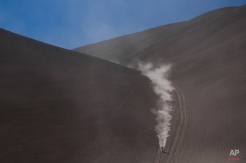 Honda rider Joan Barreda of Spain races during the fifth stage of the Dakar Rally 2015 between the cities of Copiapo and Antofagasta, Chile, Thursday, Jan. 8, 2015. (AP Photo/Felipe Dana)

Children dressed as Cuban revolutionaries attend a caravan tribute marking the 56th anniversary of the original street party that greeted a triumphant Fidel Castro and his rebel army, in Regla, Cuba, Thursday, Jan. 8, 2015, Castro and his rebels arrived in Havana via caravan on Jan. 1, 1959, after toppling dictator Fulgencio Batista. The revolutionary leader and former president has not spoken publicly on the historic Dec. 17th US-Cuba detente. (AP Photo/Ramon Espinosa)

Stig Severinsen, a Guinness World Record holder for holding his breath for 22 minutes, holds his breath in a water tank at the Masimo booth at the International CES Thursday, Jan. 8, 2015, in Las Vegas. (AP Photo/Jae C. Hong)

A State House employee casts a shadow while passing the House Chamber of the Georgia State Capitol, Thursday, Jan. 8, 2015, in Atlanta. Georgia’s Legislature convenes Monday in Atlanta, and a rough list of legislative priorities still is shaping up. But it’s clear Gov. Nathan Deal and legislative leaders have high hopes for the 40-day session. Both parties view the start of Deal’s second and final term in office as an opportunity to get some work done. (AP Photo/David Goldman)

A Filipino boy runs amid black smoke billowing from electrical wires being burned by scavengers at a dumpsite in Manila, Philippines on Thursday, Jan. 8, 2015. Scavengers earn about P150 (US $3) a day by selling recyclable scraps, copper and other metals they find in the heap of garbage. (AP Photo/Aaron Favila)