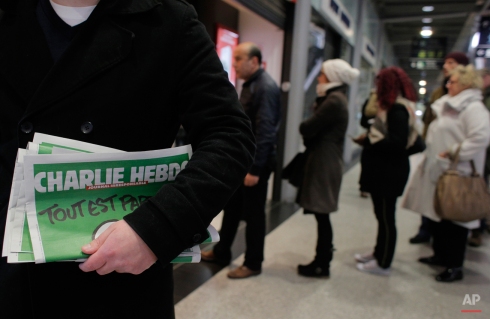 A man leaves after buying Charlie Hebdo newspapers as people queue at a newsstand in Paris, Wednesday, Jan. 14, 2015. In an emotional act of defiance, Charlie Hebdo resurrected its irreverent and often provocative newspaper, featuring a caricature of the Prophet Muhammad on the cover that drew immediate criticism and threats of more violence. (AP Photo/Christophe Ena)

A life-size portrait of Pope Francis is lit at the entrance of the media tent outside the Manila Hotel in Manila, Philippines, Wednesday, Jan. 14, 2015. Pope Francis arrives Thursday from Sri Lanka for a pastoral visit which is expected to draw millions of faithful where about 81-percent of the population is Catholic. (AP Photo/Wally Santana)

Hindu devotees bathe early morning at Sangam, the confluence of rivers Ganges and Yamuna, to mark Makar Sankranti festival during the annual traditional fair of “Magh Mela” in Allahabad, India, Wednesday, Jan. 14, 2015. Hundreds of thousands of devout Hindus are expected to take holy dips at the confluence during the astronomically auspicious period of over 45 days celebrated as Magh Mela. (AP Photo/Rajesh Kumar Singh)

Catalonia’s regional president Artur Mas gestures during a press conference announcing elections at the Generalitat Palace in Barcelona, Spain, Wednesday, Jan. 14, 2015. The leader of Spain’s separatist-minded Catalonia region has announced that regional elections will be held in September to determine whether a majority of lawmakers favor an independence drive. Catalonia regional leader Artur Mas says elections will be held Sept. 27 after he failed last year to convince the central government in Madrid to allow the region to hold an independence referendum. (AP Photo/Emilio Morenatti)

A Kosovo Serb man hangs in a tree waving a Serbian flag during the visit of Serbian prime minister Aleksandar Vucic in the Kosovo village of Gracanica on Wednesday, Jan. 14, 2015. Serbia’s prime minister is making a landmark visit to Kosovo on Wednesday, signifying the first step towards normalizing relations between the two countries. (AP Photo/Visar Kryeziu)

A security guard stands in front of lights set up as part of an ice carvings festival held inside the Worker’s Stadium in Beijing, Wednesday, Jan. 14, 2015. (AP Photo/Ng Han Guan)