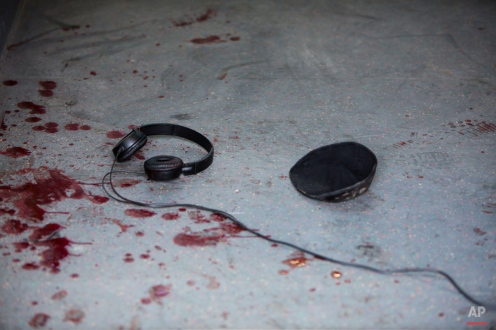 A Jewish cap and headphones lie in blood stains on the floor at a bus stop after a stabbing attack in Tel Aviv, Israel, Wednesday, Jan. 21, 2015. A Palestinian man stabbed nine people, injuring several seriously, on a bus in central Tel Aviv before he was chased down, shot and arrested, Israeli police said Wednesday, describing the assault as a “terror attack” in the latest in a spate of violence, the worst Israel has seen in almost a decade. (AP Photo/Oded Balilty) 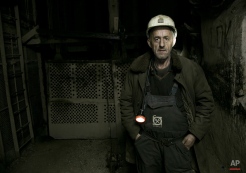 Miner of the Trepca mining complex stands inside of the Stari trg mine during a miners strike on Wednesday, Jan. 21, 2015. Over 400 employees have gone on strike inside the Trepca mine in Kosovo demanding the government takes over the administration of the Yugoslav-era giant complex to stop it from liquidation. Trepca spokesman Musa Mustafa said the workers want the government in charge of the complex, which is rich in lead, zinc, silver and gold. On Tuesday Kosovo’s assembly amended a law on public enterprises which enabled it to delay resolving the Trepca issue for another 18 months. Serbia, that rejects Kosovo’s 2008 secession, says no action can be taken without Belgrade’s consent. (AP Photo/Visar Kryeziu) 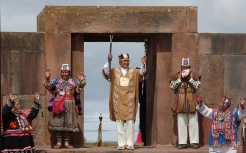 Bolivia’s President Evo Morales holds his sacred staffs of power in a ceremonial swearing-in, led by Aymaran spiritual guides, at the archeological site Tiwanaku, Bolivia, Wednesday, Jan. 21, 2015. Morales is set to begin a new term Thursday, that will make him the Andean nation’s longest-serving leader, riding high on a wave of unprecedented growth and stability. (AP Photo/Juan Karita)

An Indian man suspected to be infected with swine flu rests while taking treatment inside the Swine flu ward at Gandhi Hospital in Hyderabad, India, Wednesday, Jan. 21, 2015. According to local reports, nine people died of the flu at the state-run hospital. (AP Photo/Mahesh Kumar A.)

Marine Cpl. Chaz Sorensen loses his hat due to the jet’s exhaust as Air Force One, with President Barack Obama aboard, departs from Andrews Air Force Base, Md., Wednesday, Jan. 21, 2015, en route to Boise State University where he will discuss the themes in his State of the Union address. (AP Photo/Jose Luis Magana)

Roger Federer of Switzerland serves to Simone Bolelli of Italy during their second round match at the Australian Open tennis championship in Melbourne, Australia, Wednesday, Jan. 21, 2015. (AP Photo/Lee Jin-man)

A Pakistani police officer, left, stands guard while a polio worker vaccinates an Afghan refugee child against polio in a slum on the outskirts of Islamabad, Pakistan, Wednesday, Jan. 21, 2015. Militants have spread a rumor among ultraconservative parents in Pakistan’s deeply religious northwest, saying the polio vaccine will make their children impotent. The vaccine, they claim, is a ploy by the West to limit the world’s Muslim population. (AP Photo/Muhammed Muheisen)