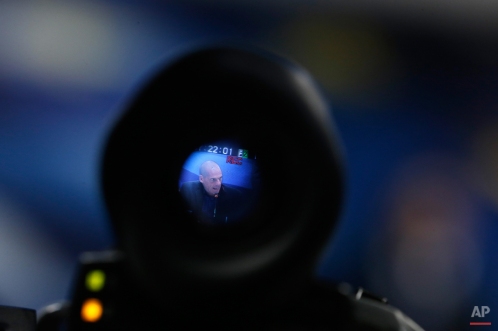 Greece’s new Finance Minister Yanis Varoufakis is seen through a camera viewfinder as he makes statements during a handover ceremony at the Finance Ministry in Athens, Wednesday, Jan. 28, 2015. Greece’s new leftist prime minister Alexis Tsipras says his government’s top priorities are to negotiate with Greece’s partners to resolve the country’s financial predicament and to deal with what he describes as Greece’s humanitarian crisis. (AP Photo/Petros Giannakouris)

A young boy watches hostesses as he waits to play a new video game at the Taipei Game Show in Taipei, Taiwan, Wednesday, Jan. 28, 2015. The game show, one of the leading digital interactive gaming events in Asia, will run from Jan. 28 through Feb. 1. (AP Photo/Wally Santana)

A young Zanzibari fisherman takes a break on a sandbank in the Indian Ocean off the coast of Matemwe village, northeastern Zanzibar, Tanzania, Wednesday, Jan. 28, 2015. (AP Photo/Mosa’ab Elshamy)

A woman watches a TV news program Wednesday, Jan. 28, 2015 in Tokyo reporting on a video posted on YouTube by jihadists on Tuesday, Jan. 27, that purports to show a still photo of Japanese hostage Kenji Goto holding what appears to be a photo of Jordanian pilot 1st Lt. Mu’ath al-Kaseasbeh. Goto’s mother appealed publicly to Japan’s leader to save her son after his captors purportedly issued what they said was a final death threat. (AP Photo/Eugene Hoshiko) 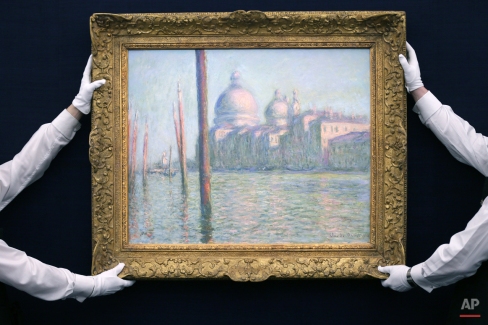 Sotheby’s staff pose for a picture with ‘Le Grand Canal’ by Claude Monet, during a preview of their upcoming Impressionist and Modern, Surrealist and Contemporary Art sale, at the auction house in London, England, Wednesday, Jan. 28, 2015. The collection of paintings and sculptures, with an estimated total value of 233 million pounds ($354 million), is due to go under the hammer on Feb. 3 and Feb. 10. (AP Photo/Tim Ireland) 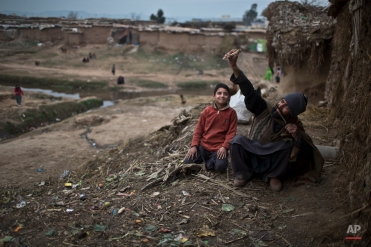 An Afghan refugee man refugee man shows his son how to use a slingshot, in a slum on the outskirts of Islamabad, Pakistan, Wednesday, Jan. 28, 2015. (AP Photo/Muhammed Muheisen)

Ukrainian servicemen put their dogs under the jackets to keep them warm in Mariupol, Ukraine, Wednesday, Jan. 28, 2015. The military conflict between Russia-backed separatists and the government forces in eastern Ukraine has been raging since April, claiming more than 5,100 lives, according to the United Nations. (AP Photo/Evgeniy Maloletka)