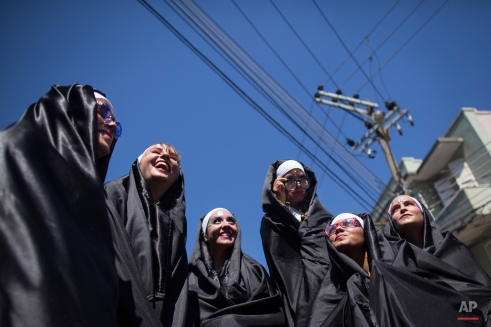 Revelers dressed as nuns perform during the “Carmelitas” carnival parade in Rio de Janeiro, Brazil, Friday, Feb. 13, 2015. Carmelitas is a band started in 1990 by a group of friends who gathered for soccer and drinks just outside a Carmelite convent. Jokes about the possibility of nuns escaping to join the party gave rise to the band, which parades twice: once at the beginning of Carnival, when the nuns escape the convent to join the fun, and then on the last day, when they return to their cloistered existence. (AP Photo/Felipe Dana) 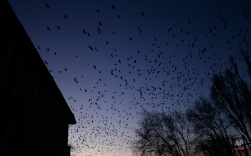 Birds swarm in the sky as shelling between Russian-backed separatists and Ukrainian government takes place in a residential area of the town of Artemivsk, Ukraine, Friday, Feb. 13, 2015. Despite a looming cease-fire deal for eastern Ukraine, a government-held town 40 kilometers (25 miles) behind the front line has been hit by shelling, killing at least one person. The deadline for the warring sides to halt hostilities is Sunday morning at one minute after midnight. (AP Photo/Petr David Josek) 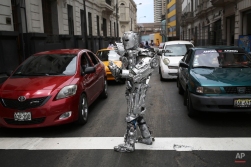 The U.S. flag is raised for gold medallist Brittany Bowe of the U.S. on the podium of the women’s 1000 meter race of the speedskating single distance world championships at Thialf ice rink in Heerenveen, Netherlands, Friday, Feb. 13, 2015. (AP Photo/Peter Dejong)

A Bahraini anti-government protester with a mask to protect from tear gas fired by riot police runs for cover during clashes following a march Friday, Feb. 13, 2015, in the Manama suburb of Bilad al-Qadeem, Bahrain. The protester is holding a picture of Sheikh Ali Salman, the jailed leader of the largest opposition political society. Protest marches were held and clashes erupted in opposition areas nationwide Friday, where many shops stayed closed as part of a three-day general strike called by the February 14 opposition youth group before Saturday’s fourth anniversary of Bahrain’s pro-democracy uprising. (AP Photo/Hasan Jamali)

Pakistani Sughar Ramadan, 38, and her daughters Shameem, 7 and Samreen, 2, sit around a fire to warm themselves from the night cold inside their makeshift home in a slum in Islamabad, Pakistan, Friday, Feb. 13, 2015. (AP Photo/Muhammed Muheisen)