A flannel shirt and jeans stuffed to look like a person sits in a chair with a beer covered with snow along the side of the road Tuesday, Feb. 17, 2015, in Brandywine, Md. Several inches of snow fell in the region closing the federal government and area schools. (AP Photo/Carolyn Kaster) 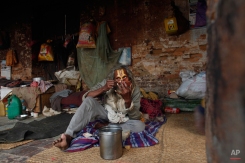 A Hindu holy man paints his face with sandalwood paste at the courtyard of the Pashupatinath temple during “Shivaratri” festival in Kathmandu, Nepal, Tuesday, Feb. 17, 2015. “Shivaratri”, or the night of Shiva, is dedicated to the worship of Lord Shiva, the Hindu god of death and destruction. (AP Photo/Niranjan Shrestha)

A boy runs at a temple casted with shadows of traditional Chinese lantern decorations ahead of the Chinese Lunar New Year in Kuala Lumpur, Malaysia, on Tuesday, Feb. 17, 2015. Chinese will celebrate the Lunar New Year on Feb. 19 this year which marks the Year of Goat on the Chinese zodiac. (AP Photo/Joshua Paul)

In this photo taken with a fisheye lens Pittsburgh Pirates catchers wait their turn in the batting cage during an informal spring training workout in Bradenton, Fla., Tuesday, Feb. 17, 2015. Workouts officially get underway for Pirates pitchers and catchers Thursday, Feb. 19, with the full squad taking the field on Tuesday, Feb. 24. (AP Photo/Gene J. Puskar)

Devotees offer flowers to an idol of Hindu God Shiva at a temple during Shivratri festival, or the night of Shiva, in Gauhati, India, Tuesday, Feb. 17, 2015. The festival is dedicated to the worship of Lord Shiva, the Hindu god of destruction. (AP Photo/Anupam Nath)

Afghan refugees and internally displaced Pakistani girls from tribal areas sit on the ground during a class on how to read and write at a makeshift school on the outskirts of Islamabad, Pakistan, Tuesday, Feb. 17, 2015. (AP Photo/Muhammed Muheisen)

Egyptians light candles during a vigil for Christians who were killed in Libya, at St. Mark’s Cathedral in Cairo, Egypt, Tuesday, Feb. 17, 2015. An Islamic State video released on 15 February claimed to show the extremist group beheading 21 Egyptian Christians abducted in Libya more than a month ago. The Egyptian army responded on Feb. 16 by an airstrike against the militants targeting bases and weapons storage facilities in Libya. (AP Photo/Amr Nabil)

A portrait of Ozgecan Aslan, 20, a student, whose body was found Friday in Mersin in southern Turkey, that left by an opposition lawmaker on the podium of the parliament in Ankara, Turkey, Tuesday, Feb. 17, 2015. Aslan allegedly fought a sexual assault before being killed by the driver of a bus she’d taken to go home. The murder of young woman sparked outrage in Turkey. Turkey’s Family Affairs Minister Aysenur Islam seen in the background. (AP Photo) 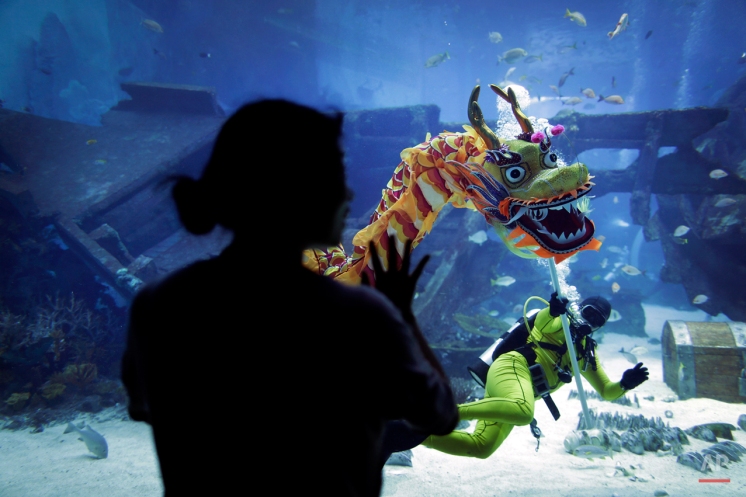