Hindu men from the village of Nandgaon, smeared with colors sing at the Ladali or Radha temple before taking out a procession for the Lathmar Holi festival at the legendary hometown of Radha, consort of Hindu God Krishna, in Barsana, 115 kilometers (71 miles) from New Delhi, India, Friday, Feb. 27, 2015. During Lathmar Holi the women of Barsana beat the men from Nandgaon, the hometown of Krishna, with wooden sticks in response to their teasing. (AP Photo/Saurabh Das)

Riot Police remove housing rights activists as they tries to stop Luisa Gracia Gonzalez and her family’s eviction and the demolition of their house by a forced expropriation in Madrid, Spain, Friday, Feb. 27, 2015. Madrid authorities say 11 people were arrested after several dozen protesters clashed with police who were carrying out an eviction order. A city spokeswoman said seven people were arrested for throwing gasoline at police officers, though she said the fuel was not set alight. The official spoke on condition of anonymity in keeping with city hall rules. Evictions in Spain have soared since the country’s economic crisis began in 2008 and increasing numbers of people were unable to meet mortgage payments. Protesters regularly try to prevent evictions, but Friday’s clash was particularly tense after a campaign to keep the family in its home. The house was expropriated for demolition as part of new urban project. Some 30 protesters tried to stop it, accusing authorities of real estate speculation. (AP Photo/Andres Kudacki)

A woman holds up her hand as she waits to be silhouetted with white chalk during a performance by Spanish Artist Irisarri at ARCO, the international contemporary Art fair in Madrid, Spain, Friday, Feb. 27, 2015. The ARCO art fair will run from Feb. 25 to March 1, 2015. (AP Photo/Daniel Ochoa de Olza)

Eugenio Lafargue cuts a client’s hair inside his barbershop decorated with a Cuban and U.S. flag in Havana, Cuba, Friday, Feb. 27, 2015. The U.S. and Cuba held a second round of negotiations Friday in Washington on restoring diplomatic relations after a half-century interruption, although an immediate breakthrough appeared unlikely. (AP Photo/Ramon Espinosa)

An Afghan villager walks along in snow near to an avalanche in the Paryan district of Panjshir province, north of Kabul, Afghanistan, Friday, Feb. 27, 2015. The death toll from severe weather that caused avalanches and flooding across much of Afghanistan has jumped to more than 200 people, and the number is expected to climb with cold weather and difficult conditions hampering rescue efforts, relief workers and U.N. officials said Friday. (AP Photo/Rahmat Gul) 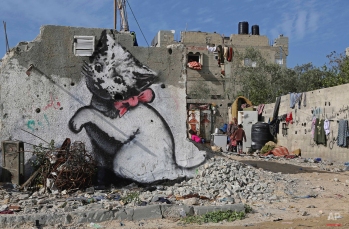 A Palestinian woman works with her children near a mural of a playful-looking kitten, presumably painted by British street graffiti artist Banksy, is seen on a wall of destroyed which was destroyed in last summer’s Israel-Hamas war, in Beit Hanoun, in the northern Gaza Strip, Friday, Feb. 27, 2015. In a short film posted on his website, the popular street artist appears to sneak into Gaza through an underground tunnel from Egypt. The video shows aftermath footage from the 2014 Gaza summer war and includes political commentary about the stripís misery. Some of his work is seen as well, such as a drawing of a Greek goddess cowering against a remaining concrete slab of a destroyed structure. (AP Photo/Adel Hana) 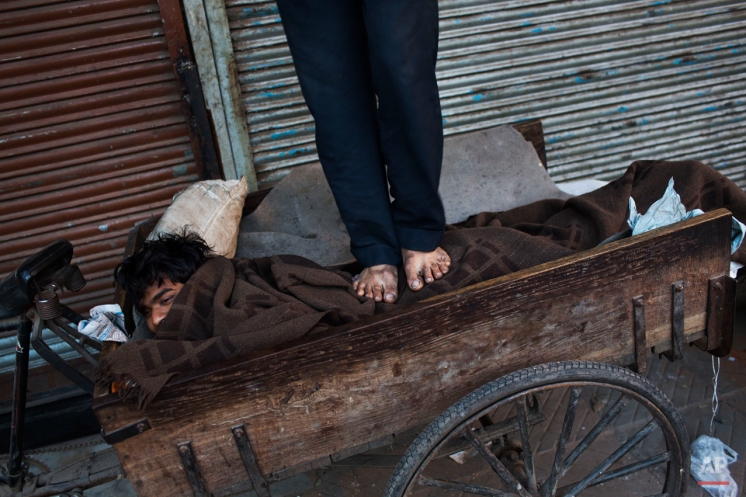 An Indian homeless man gets a massage from a friend early in the morning at the old city area of New Delhi, India, Friday, Feb. 27, 2015. Old Delhi despite of being extremely crowded and dilapidated still serves as the symbolic heart of the city. (AP Photo/Bernat Armangue)