A Bangladeshi cricket fan waves the Bangladeshi flag standing atop a sculpture as hundreds gather to celebrate their team’s victory in the World Cup match against England at the Dhaka University Campus in Dhaka, Bangladesh, Monday, March 9, 2015. Bangladesh defeated England by 15-runs Monday to enter the quarterfinals. (AP Photo/Suvra Kanti Das)

A bloodied German Schalke fan is arrested in Madrid’s central Sol plaza after he tossed beer on an officer and was beaten by police, Monday, March 9, 2015. Hundreds of rowdy Shalke fans were drinking when authorities tried to clear them off the streets and herded them into a bar. At least two were arrested. Shake plays Real Madrid Tuesday night in round 16 of the second leg of the Champions League soccer competition. (AP Photo/Andres Kudacki)

Filipino women have their heads shaved during a rally at the gates of the House of Representatives in suburban Quezon city, north of Manila, Philippines on Monday, March 9, 2015. Fifteen women farmers had their heads shaved to protest the alleged failure of the House of Representatives to immediately pass bills that could extend and overhaul the implementation of the Comprehensive Agrarian Reform Program (CARP). (AP Photo/Aaron Favila) 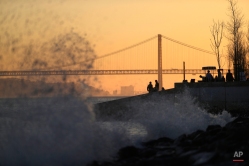 People relax as waves break against the Tagus riverbank at sunset, in Lisbon, Monday, March 9, 2015. The city promenade is a popular riverside walk path where people stroll, take photographs or pause to enjoy the view. (AP Photo/Francisco Seco)

Demonstrators protest the shooting of Tony Robinson at the state Capitol Monday, March 9, 2015, in Madison, Wis. Robinson, 19, was fatally shot Friday night by a police officer who forced his way into an apartment after hearing a disturbance while responding to a call. Police say Robinson had attacked the officer. (AP Photo/Andy Manis)

Dorothy Webster holds the ring of her dead brother 23-year old British pilot Sgt. John Thompson, in Tirana Monday, March 9, 2015. Thompson crashed in Albania Oct. 29, 1944 while transporting materials to the local anti-Nazi partisan fighters. Sgt. John Thompson, a British World War II special operation pilot, was considered missing in action for more than 70 years. Not anymore. On Monday, his 92-year-old sister Dorothy Webster received his ring from a family in Albania together with a box of debris from his Halifax bomber that crashed in the eastern European country on Oct. 29, 1944. (AP Photo/Hektor Pustina)

Chadian troops watch others participate in the closing ceremony of operation Flintlock in an army base in N’djamena, Chad, Monday, March 9, 2015. The U.S. military and its Western partners conduct this training annually and set up plans long before Boko Haram began attacking its neighbors Niger, Chad and Cameroon. Chadian Brig. Gen. Zakaria Ngobongue said Monday that his soldiers alongside troops from Niger had entered Nigeria but he declined to give further details about the ongoing operation. Ngobongue described Boko Haram fighters as “bandits and criminals who have nothing to do with religion.” (AP Photo/Jerome Delay)

A Palestinian student prepares to fly her kite during a commemoration to mark the fourth anniversary of Japan’s Tsunami organized by the United Nations Relief and Works Agency, in Khan Younis, southern Gaza Strip, Monday, March 9, 2015. (AP Photo/Adel Hana))

A woman sits on a bed in the main hospital in Debaltseve, Ukraine, Monday, March 9, 2015. More than 6,000 people have died in eastern Ukraine since the start of the conflict almost a year ago that has led to a “merciless devastation of civilian lives and infrastructure,” according to the U.N. human rights office. (AP Photo/Vadim Ghirda)