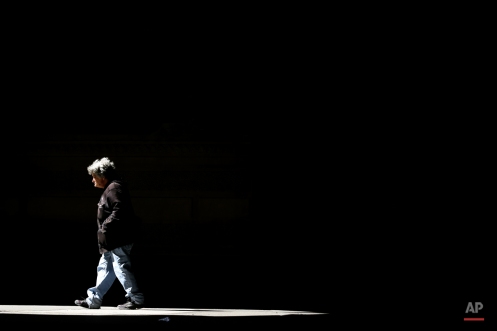 A pedestrian passes into the light from beneath City Hall, Thursday, March 19, 2015, in Philadelphia. (AP Photo/Matt Rourke) 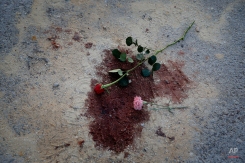 Flowers are placed on a bloodstain during a demonstration in front of the National Bardo Museum a day after gunmen attacked the museum and killed scores of people in Tunis, Tunisia, Thursday, March 19, 2015. The Islamic State group issued a statement Thursday claiming responsibility for the deadly attack on Tunisia’s national museum that killed scores of people, mostly tourists. (AP Photo/Christophe Ena) 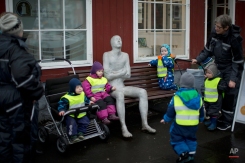 Local young children and their carriers surround a statue outside the tourist office in Torshavn, the capital city of the Faeroe Islands, Thursday, March 19, 2015. For months, even years, accommodation on the remote Faeroe Islands has been booked out by fans who don’t want to miss an almost three-minute-long astronomical sensation. Now they just have to hope the clouds will blow away so they can fully experience Friday’s brief total solar eclipse. (AP Photo/Matt Dunham)

A Thai Student actress applies makeup to prepare for a performance of Thai traditional “Khon” theater in Bangkok, Thursday, March 19, 2015. Students at the Bunditpatanasilpa Institute are trained in traditional forms of drama, music and other arts in order to promote Thai culture. (AP Photo/Sakchai Lalit)

A Filipino uses a cloth to filter sediments from ink which he collects from open cans of newspaper printing machines in Manila, Philippines, Thursday, March 19, 2015. He scrapes the ink out from the cans and sells later for 1,500 Philippine Peso (about US$33) for a 25-kilogram (882 oz) can after filtering. (AP Photo/Aaron Favila)