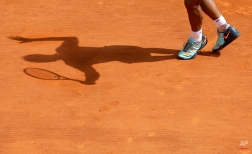 The shadow of Rafael Nadal of Spain is seen during the quarterfinal match of the Monte Carlo Tennis Masters tournament against David Ferrer of Spain, in Monaco, Friday, April 17 2015. (AP Photo/Lionel Cironneau) 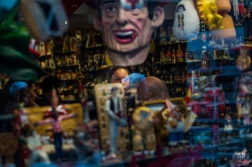 A woman looks at gifts, center, in a gift store in the old city, in Pamplona, northern Spain, Friday, April 17, 2015. (AP Photo/Alvaro Barrientos) 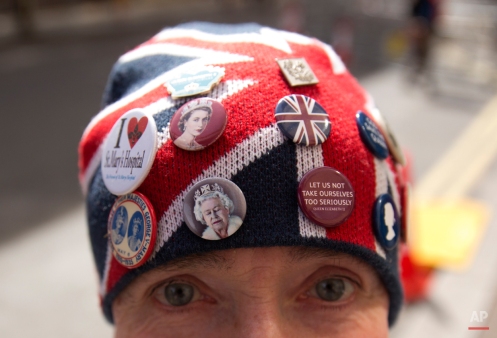 Badges are displayed on the Union flag design woolly hat worn by royal fan John Loughrey as he poses for photographers outside the Lindo Wing of St. Mary’s Hospital, London, Friday, April 17, 2015. Britain’s Kate the Duchess of Cambridge is expected to give birth to her second child with her husband Prince William at the hospital in the coming weeks. (AP Photo/Matt Dunham)

Michael Phelps warms up prior to competing in the men’s 400 freestyle preliminary, Friday, April 17, 2015, at the Arena Pro Swim Series in Mesa, Ariz. (AP Photo/Matt York)

People cross a bridge near to the old city during a spring day, in Pamplona northern Spain, Friday, April 17, 2015. (AP Photo/Alvaro Barrientos)

A Palestinian demonstrator uses a sling to throw back a tear gas canister fired by Israeli soldiers during clashes following a protest marking Palestinian “Prisoners’ Day” in the West Bank village of Bilin, near Ramallah, Friday, April 17, 2015. (AP Photo/Majdi Mohammed)

A child joins a queue at a shelter for displaced foreigners near Johannesburg, Friday, April 17, 2015, after overnight attacks between locals and immigrants in Johannesburg. Several shops and cars were torched overnight in continued anti-immigrant attacks by locals. (AP Photo/Denis Farrell)

Indian children play at dusk on a mound of sand in Bangalore, India, Friday, April 17, 2015. Schools in Bangalore close for about two months for the summers starting early April every year. (AP Photo/Aijaz Rahi)