One World Trade Center stands in Lower Manhattan, Tuesday, April 21, 2015, in New York. The visitors center at the top of the 104-floor skyscraper, One World Observatory, is scheduled to open to the public on May 29. (AP Photo/Mark Lennihan) 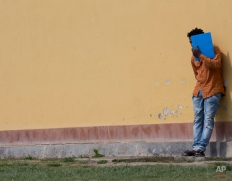 A migrant covers his face in the Mineo holding center, Sicily, Italy, Tuesday, April 21, 2015. The 27 survivors of the deadly shipwreck off the Coast of Libya last weekend were taken into the Mineo migrant center, the largest center in Sicily, hosting nearly 4,000 people. (AP Photo/Alessandra Tarantino) 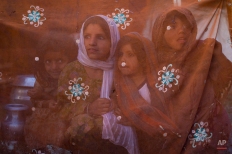 Bakarwal nomad children are seen through a veil that covers their tent as they react to a Kashmiri man photographing them on the outskirts of Srinagar, Indian controlled Kashmir, Tuesday, April 21, 2015. Bakarwals are nomadic herders of Jammu Kashmir state who wander in search of good pastures for their cattle. (AP Photo/Dar Yasin) 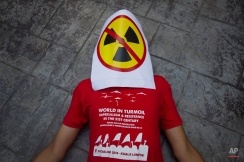 A protestor lies on the ground with an anti-nuclear placard covering his face during a protest in Bangi outside Kuala Lumpur, Malaysia on Tuesday, April 21, 2015. In conjunction with the World Earth Day on April 22, about a dozen protestors from the Malaysia Socialist Party gathered outside the Malaysia Nuclear Agency to protest the development plans of nuclear reactor in Malaysia. (AP Photo/Joshua Paul) 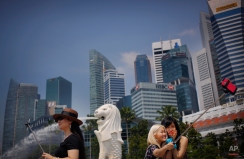 Tourists use selfie sticks to take photos of themselves with their smart phones, at one of Singapore’s popular tourists spots with the financial skyline in the background, Tuesday, April 21, 2015, in Singapore. The city-state’s government announced earlier in the year, new plans for its global marketing campaign to tap on the country’s year-long 50th birthday celebration, as part of its continued effort to boost tourism numbers in 2015, after the country went through a challenging season in 2014. (AP Photo/Wong Maye-E)

A man walks down the stairs on a sunny afternoon near the Prague Castle in Prague, Czech Republic, Tuesday, April 21, 2015. (AP Photo/Petr David Josek)

Pakistani children play in a stream polluted by sewerage from nearby localities, in a suburb of Islamabad, Pakistan, Tuesday, April 21, 2015. Pakistan will also observe the Earth Day on April 22, 2015. (AP Photo/B.K. Bangash)

The hands of displaced foreign nationals are photographed as they stand outside a shelter for displaced foreigners in east of Johannesburg, South Africa, Tuesday, April 21, 2015. The South African army has been deployed to areas that remain volatile after a spate of attacks targeting immigrants, the defense minister announced on Tuesday. (AP Photo/Themba Hadebe)