A Burundi riot police officer watches a group of stone throwing demonstrators during clashes in the Musaga district of Bujumbura, Burundi, Tuesday April 28, 2015. Anti-government street demonstrations continued for a third day after six people died in protests against the move by President Pierre Nkurunziza to seek a third term. (AP Photo/Jerome Delay)

The sun sets over the destroyed village of Paslang village near the epicenter of Saturday’s massive earthquake in the Gorkha District of Nepal, Tuesday, April 28, 2015. Military operations continue Tuesday to reach the isolated areas following the powerful earthquake that has devastated the nation and killed at least 4,400 people, according to district official Surya Mohan Adhikari. (AP Photo/Wally Santana)

Juan Montiel, centre, suffers an epileptic seizures as his wife Marivi Leon del Valle, top, and his sister Maria Luisa Montiel, 47, right, help him during their eviction in Madrid, Spain on Tuesday, April 28, 2015. Maria Montiel, a former geriatric assistant, was living in a Bankia bank-owned apartment with her brother, Juan Montiel, 56, who has 46 percent disability, his wife, Marivi Leon del Valle, 54, who also has health problems and a friend, Jose Antonio Garcia Mendoza, 64. Out of work and dependent on small state benefits, they had been living on the street before renting a room in the apartment, which had been occupied by others that later left. The family tried to pay a token rent but the bank insisted on their eviction. Dozens of riot police carried out the eviction despite protests by housing rights activists. (AP Photo/Andres Kudacki)

Steam rises from a horse as it gets a bath after a morning workout at Churchill Downs Tuesday, April 28, 2015, in Louisville, Ky. (AP Photo/Charlie Riedel)

Dancers warm up in a crowded street as they prepare to perform at a gathering of supporters of a radical worker’s rights organization, along Paseo de la Reforma in Mexico City, Tuesday, April 28, 2015. The “Antorchista” movement lobbies for better living conditions for workers and free housing for the poor. (AP Photo/Rebecca Blackwell)

Alain Robert, also known as the French Spiderman, climbs the Montparnasse tower a 210-metre (689 ft) office skyscraper located in the Montparnasse area of Paris, France, Tuesday, April 28, 2015. Robert decided to climb in solidarity with the victims of the Saturday’s earthquake in Nepal. (AP Photo/Christophe Ena) 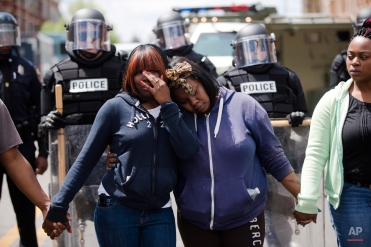 Jerrie Mckenny, center left, and her sister, Tia Sexton embrace as people sing the hymn Amazing Grace Tuesday, April 28, 2015, in Baltimore, in the aftermath of rioting following Monday’s funeral for Freddie Gray, who died in police custody. The streets were largely calm in the morning and into the afternoon, but authorities remained on edge against the possibility of another outbreak of looting, vandalism and arson. (AP Photo/Matt Rourke)

A Shiite fighter, known as a Houthi, stands guard at the residence of a military commander of the Houthi militant group, destroyed by a Saudi-led airstrike in Sanaa, Yemen, Tuesday, April 28, 2015. A security official in Saudi Arabia says a soldier has been killed and another wounded in a gunfight with Shiite Houthi rebels along the kingdom’s southern border with Yemen. (AP Photo/Hani Mohammed)