A demonstrator seriously wounded by live ammunition waits for treatment in a small clinic in the Musaga district of Bujumbura, Burundi, Monday, May 4, 2015. Anti-government demonstrations resumed in Burundi’s capital after a weekend pause as thousands continue to protest the president’s decision to seek a third term. (AP Photo/Jerome Delay) 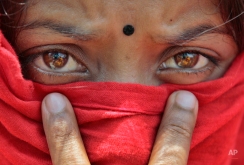 A worker of the recently closed Swan garments factory covers her face with a scarf to shelter herself from the sun as she participates in a protest outside the Bangladesh Garment Manufacturers and Export Association (BGMEA) office in Dhaka, Bangladesh, Monday, May 4, 2015. More than two hundred workers protested Monday demanding payment of wages still owed to them as well as reopening of the manufacturing unit. Bangladesh is the world’s second-largest garment manufacturing country after China. The sector employs about 4 million workers, mostly women. (AP Photo/A.M. Ahad)

A Nepalese Buddhist couple light candles at the Boudhanath Stupa during Buddha Jayanti, or Buddha Purnima, festival in Kathmandu, Nepal, Monday, May 4, 2015. Hundreds of people have visited Buddhists shrines and monasteries in Nepal’s quake-wracked Kathmandu on the birthday of Gautama Buddha to pray for the country and the people who suffered during April 25 earthquake. (AP Photo/Bernat Amangue) 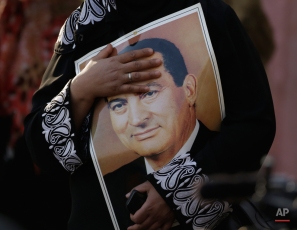 A supporter of Egypt’s deposed longtime autocrat Hosni Mubarak holds his poster as she attends a celebration of his 87th birthday outside the Maadi Military Hospital, where he is hospitalized in Cairo, Egypt, Monday, May 4, 2015. The crowd gathered Monday held up photos of Mubarak and praised him with slogans of support, days before an expected May 9 verdict in his retrial on corruption charges. (AP Photo/Amr Nabil) 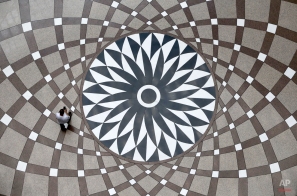 A man walks through the food court at the Thompson Center, Monday, May 4, 2015, in Chicago. (AP Photo/Charles Rex Arbogast)

A view of Republic of Korea pavilion at the Expo 2015 in Rho, near Milan, Italy, Monday, May 4, 2015. The Expo opened Friday May 1 for a six-month run and its theme is “Feeding the Planet, Energy for Life”. (AP Photo/Antonio Calanni)

An Afghan girl walks past murals on a road in Kabul, Afghanistan, Monday, May 4, 2015. The mural on the right espouses the idea that male and female citizens have equal rights under Afghan law. The other deals with marriage issues and claims that there are no forced marriages in Islam. (AP Photo/Allauddin Khan)