An aerial view of the holy Muslim Shiite shrine of Imam Moussa al-Kazim as pilgrims gather to commemorate his death, in the Shiite district of Kazimiyah, Baghdad, Iraq, Wednesday, May 13, 2015. The anniversary of 8th century Shiite Imam Moussa al- Kazim drew tens of thousands of Shiites from all walks to converge on his golden-domed shrine in northern Baghdad. The pilgrims typically march to the shrine while hundreds of tents are erected to offer them free food, drinks and services. (AP Photo/ Hadi Mizban)

Worshipper throw flower petals at the statue of the Our Lady of Fatima as it is carried at the Our Lady of Fatima shrine, in Fatima, central Portugal, Wednesday, May 13, 2015. Every year on May 12 and 13 tens of thousands of Catholic believers go on pilgrimage to the Fatima sanctuary to pray and attend masses where the apparitions of the Virgin Mary were witnessed by three shepherd children Lucia, Jacinta and Francisco in 1917. (AP Photo/Francisco Seco)

A Nepalese woman injured in Tuesday’s earthquake brought from Charikot, Dolakha District is taken to hospital at the Tribhuvan International Airport in Kathmandu, Nepal, Wednesday, May 13, 2015. Thousands of fear-stricken people spent the night out in the open as a new earthquake killed dozens of people and spread more misery in Nepal, which is still struggling to recover from a devastating quake nearly three weeks ago. (AP Photo/Niranjan Shrestha)

An aide holds an umbrella as Tibetan spiritual leader the Dalai Lama, center, sits for a group photo with monks after giving a religious talk at the Gyuto Monastery in Dharmsala, India, Wednesday, May 13, 2015. The four-day talk by the Tibetan leader ended Wednesday. (AP Photo/Ashwini Bhatia) 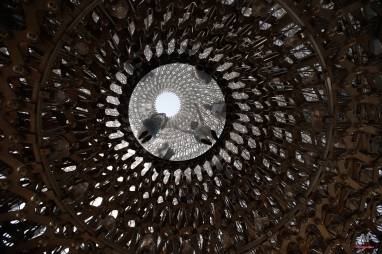 Faithful throw in the air a jersey and two hats as Pope Francis leaves at the end of his weekly general audience in St. Peter’s Square at the Vatican, Wednesday, May 13, 2015. (AP Photo/Alessandra Tarantino)

A woman using a walking cane passes through a street full of leaflets that read in Spanish “Respect for Fayt and the court” during a rally in support of Supreme Court Judge Carlos Fayt in Buenos Aires, Argentina, Wednesday, May 13, 2015. The government is questioning whether the 97-year-old judge is in good enough physical and mental condition to stay on the court, after he didn’t attend a court meeting that re-elected the head of the court. His fellow court members gave him their support Wednesday, saying he cast his vote and that those decisions can be signed inside or outside the court. (AP Photo/Natacha Pisarenko)

Riot police break into Rebeca Ferreruela’s apartment to evict her and her family in Madrid, Spain, Wednesday, May 13, 2015. Rebeca Ferreruela 34, and her husband Santos Dual Salazar, 46, have three children of 3, 11 and 16. Out of work and dependent on state benefits of euros 626 ($707), they occupied a Bankia bank-owned apartment. The family tried to pay a token rent but the bank insisted on their eviction. Dozens of riot police carried out the eviction despite protests by housing rights activists. (AP Photo/Andres Kudacki)

A worker looks from inside the Kentex rubber slipper factory after a fire hit it in Valenzuela city, north of Manila, Philippines, Wednesday, May 13, 2015. The fire possibly killed dozens of workers who ran to the second floor in hopes of escaping only to become trapped by the inferno, officials said. At least three bodies have been recovered and fire officials found no survivors after the fire was put under control, an official added. (AP Photo/Aaron Favila)

Indonesian immigration officials take photos of an ethnic Rohingya young girl upon her arrival at a temporary shelter for the migrants whose boats washed ashore on Sumatra island on Sunday, in Lapang, Aceh province, Indonesia, Wednesday, May 13, 2015. More than 1,600 migrants and refugees have landed on the shores of Malaysia and Indonesia in the past week and thousands more are believed to have been abandoned at sea, floating on boats with little or no food after traffickers literally jumped ship fearing a crackdown. (AP Photo/Binsar Bakkara)

In this aerial photo, emergency personnel work at the scene of a deadly train wreck, Wednesday, May 13, 2015, in Philadelphia. Federal investigators arrived Wednesday to determine why an Amtrak train jumped the tracks in a wreck that killed at least six people, and injured dozens. (AP Photo/Patrick Semansky)

A street vendor collects his clothes outside the shutters of a shop in central Athens, early Wednesday, May 13, 2015. Greece, which is in the midst of protracted bailout talks with creditors, is now officially in recession again according to data released Wednesday, less than a year after it emerged from a six-year depression. (AP Photo/Petros Giannakouris)