Eugenia Gimenez, holding her baby Nicanor, stands with her back covered with the words in Spanish: “I gave birth at home” during a protest against restrictions on home births in Buenos Aires, Argentina, Thursday, May 14, 2015. The Argentine Midwives Association is pushing against the Health Ministry’s proposal to put new restrictions and regulations on home births, saying the number of home births has tripled over last three years as “people try to avoid the epidemic of caesarian sections.” (AP Photo/Natacha Pisarenko)

Zimbabwean police officers take part in the Presidential Graduation ceremony which was officiated by President Robert Mugabe at the General Police headquarters in Harare, Thursday, April 14, 2015. A total of 698 police officers graduated at the ceremony after undergoing training by the Zimbabwe Republic police. ( AP Photo/Tsvangirayi Mukwazhi) 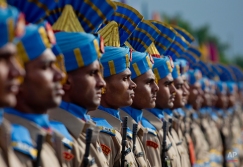 Newly recruited members of the Indian Central Reserve Police Force (CRPF) stand during their commencement parade at a base camp on the outskirts of Srinagar, Indian controlled Kashmir, Thursday, May 14, 2015. The new soldiers will join the Indian security men fighting separatist Islamic guerrillas in Kashmir and Maoist rebels in different parts of India. (AP Photo/Dar Yasin)

British artist David Hockney poses for photographers in front of his photographic drawing printed on paper “The Chairs” which features as part of the “David Hockney Painting and Photography” exhibition at the Annely Juda Fine Art gallery in London, Thursday, May 14, 2015. The show, which runs from May 15 to June 27, is an exploration of Hockney’s interest in perspective and features a series of portraits, including his American friends playing cards, and other scenes painted in his Los Angeles studio in 2014 and 2015. (AP Photo/Matt Dunham)

An ethnic Rohingya young girl holds a balloon of Russian cartoon character “Masha” at a temporary shelter in Lapang, Aceh province, Indonesia, Thursday, May 14, 2015. More than 1,600 migrants and refugees from Myanmar and Bangladesh have landed on the shores of Malaysia and Indonesia in the past week and thousands more are believed to have been abandoned at sea, floating on boats with little or no food after traffickers literally jumped ship fearing a crackdown. (AP Photo/Binsar Bakkara)

Greek Finance Minister Yanis Varoufakis, right, arrives at an economic conference in Athens, on Thursday, May 14, 2015. Varoufakis said Thursday that he will reject any deal with bailout creditors unless it helps Greece escape from its financial crisis. (AP Photo/Petros Giannakouris)

A Nepalese woman carries a child and stands beside a makeshift tent in Nalinchowk, near Kathmandu, Nepal, Thursday, May 14, 2015. On April 25, a magnitude-7.8 earthquake killed thousands of people, injured tens of thousands more and left hundreds of thousands homeless. Then, just as the country was beginning to rebuild, a magnitude-7.3 earthquake battered it again. (AP Photo/Bernat Amangue)

A Hezbollah fighter, right, mourns over the coffin of his comrade Ahmad al-Amin, who was killed while fighting in Qalamoun mountains against Nusra Front, al-Qaida’s branch in Syria, during his funeral procession in the southern village of Babliyeh, Lebanon, Thursday, May 14, 2015. Syrian troops backed by Lebanese Hezbollah fighters have made progress in the Qalamoun mountains along Lebanon’s border, near the Syrian capital. (AP Photo/Mohammed Zaatari)

Yara, 5, and her brother Youssef, left, 16 months, hide inside a cardboard box as they play under a bridge while their mother sells tissue in Cairo, Egypt, Thursday, May 14, 2015. (AP Photo/Hassan Ammar)