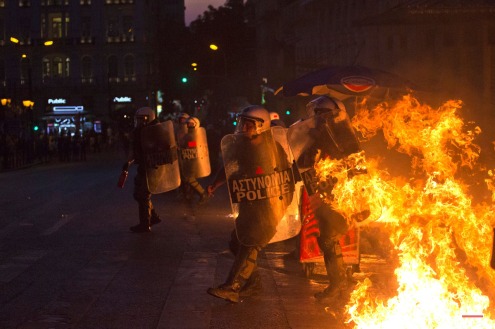 Riot police officers run away from fire as anti-austerity protesters throw petrol bombs during clashes in Athens, Wednesday, July 15, 2015. Greece’s prime minister was fighting to keep his government intact in the face of outrage over an austerity bill that parliament must pass Wednesday night if the country is to start negotiations on a new bailout and avoid financial collapse. The raft of consumer tax increases and pension reforms will condemn Greeks to years of more economic hardship and has fueled anger among the governing left-wing Syriza party. (AP Photo/Emilio Morenatti)

President Barack Obama salutes as he steps off Marine One after arriving at North Texas Regional Airport, Wednesday, July 15, 2015, in Denison, Texas. Obama traveled to Durant, Okla., to deliver a speech in the Choctaw Nation on economic opportunities for underprivileged communities across the nation. (AP Photo/Evan Vucci)

A Galapagos tortoise rests in a mud puddle in San Cristobal, Galapagos Islands, Ecuador, Wednesday, July 15, 2015. The islands are known for their endemic species and were studied by Charles Darwin and contributed to his theory of evolution by natural selection. UNESCO recognized the islands in 1978 as a World Heritage center. (AP Photo/Dolores Ochoa)

A figurine of Jesus is among personal items found in the debris of the home of Kevin and Polly Johnson after deadly flooding in Flat Gap, Ky., Wednesday, July 15, 2015. Family members have been looking for Johnson’s son after he helped saved the lives of four family members but went missing during flash floods in northern Johnson County outside of Paintsville. (AP Photo/David Stephenson)

Carlos Ramirez, of West Palm Beach, Fla., cools off under a misting fan while visiting Zoo Atlanta, Wednesday, July 15, 2015, in Atlanta. Severe thunderstorms will be possible over the southern half of Georgia and eastern South Carolina as temperatures hover around the ninety degree mark. (AP Photo/David Goldman) 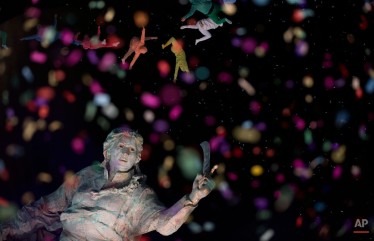 Acrobats perform above the newly unveiled statue of Bolivian Juana Azurduy de Padilla, behind the government house in Buenos Aires, Argentina, Wednesday, July 15, 2015. The presidents of Argentina and Bolivia led the ceremony of the unveiling of the statue of the Bolivian war of independence heroine. The statue is a present from Bolivia and replaces a statue of Christopher Columbus brought down in 2013. (AP Photo/Natacha Pisarenko)

Trails of chalk follow the hands of the United States’ Sam Mikulak during artistic gymnastics horizontal bar competition in the Pan Am Games in Toronto, Wednesday, July 15, 2015. (AP Photo/Gregory Bull)