Security forces stand behind a burning road block set up by indigenous protesters from the highlands along the Panamerican Highway during a general strike in El Chasqui, Ecuador, Thursday, Aug. 13, 2015. A strike by a broad coalition upset with President Rafael Correa virtually paralyzed the capital, provincial cities and stretches of the Panamerican highway. The protesters are indigenous activists, unionists, environmentalists and members of the traditional political opposition. (AP Photo/Dolores Ochoa) 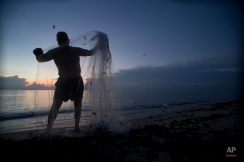 Jose Perez, of Miami, shakes his net on shore to release his catch of small bait fish in the predawn hours, Thursday, Aug. 13, 2015, in Bal Harbour, Fla. (AP Photo/Wilfredo Lee)

Thea Jones, framed by flowers, waves to her grandchildren to come and have their photograph taken at a good spot she found near Washington Monument in Washington, Thursday, Aug. 13, 2015. Clear blue skies and temperatures in the eighties make for a perfect day to visit the National Mall. (AP Photo/Carolyn Kaster)

Jordan Spieth hits a shot on the sixth hole during the first round of the PGA Championship golf tournament Thursday, Aug. 13, 2015, at Whistling Straits in Haven, Wis. (AP Photo/Brynn Anderson)

A youth points to children’s drawings dedicated to Fidel Castro’s 89th birthday inside the art studio of Alexis Leyva, known as “Kcho” in Havana, Cuba, Thursday, Aug. 13, 2015. Children drew the artwork at home and brought them to Leyva’s studio where the artist also served cake from a local baker. (AP Photo/Desmond Boylan)

Migrants family members hug each other after successfully arriving at a coast on a dinghy after crossing from Turkey, in the southeastern island of Kos, Greece, early Thursday, Aug. 13, 2015. Greece has become the main gateway to Europe for tens of thousands of refugees and economic migrants, mainly Syrians fleeing war, as fighting in Libya has made the alternative route from north Africa to Italy increasingly dangerous. (AP Photo/Alexander Zemlianichenko)

Smoke billows from the site of an explosion that reduced a parking lot filled with new cars to charred remains at a warehouse in northeastern China’s Tianjin municipality, Thursday, Aug. 13, 2015. Huge explosions in the warehouse district sent up massive fireballs that turned the night sky into day in the Chinese port city of Tianjin, officials and witnesses said Thursday. (AP Photo/Ng Han Guan)

A man with his wounds bandaged eats a bun in a hospital receiving victims of an explosion in northeastern China’s Tianjin municipality, Thursday, Aug. 13, 2015. Huge explosions in the warehouse district sent up massive fireballs that turned the night sky into day in the Chinese port city of Tianjin, officials and witnesses said Thursday. (AP Photo/Ng Han Guan)