Syrian refugees wait at the border railway station of Idomeni, northern Greece, in order to be allowed by the Macedonian police to cross the border from Greece to Macedonia, Monday, Aug. 24, 2015. Thousands of migrants have arrived on Greek islands so far this year, hoping to head north to other more prosperous European countries such as Germany, the Netherlands and Scandinavian countries. (AP Photo/Santi Palacios)

A Lebanese man holds a placard with Arabic that reads, “I swear it feels like I’m at the border with Israel,” as an engineering unit installs a concrete wall near the main Lebanese government building, a day after a violent anti-government protests, in downtown Beirut, Lebanon, Monday, Aug. 24, 2015. Organizers of the “You stink” protests that have captivated the Lebanese capital postponed anti-government demonstrations set for Monday evening after a night of violent clashes with police during which dozens of protesters and police officers were wounded. (AP Photo/Hassan Ammar)

South Korean army soldiers ride on a truck in Paju, south of the demilitarized zone that divides the two Koreas, South Korea, Monday, Aug. 24, 2015. After 40-plus-hours of talks, North and South Korea on Tuesday pulled back from the brink with an accord that allows both sides to save face and, for the moment, avert the bloodshed they’ve been threatening each other with for weeks. (AP Photo/Ahn Young-joon) 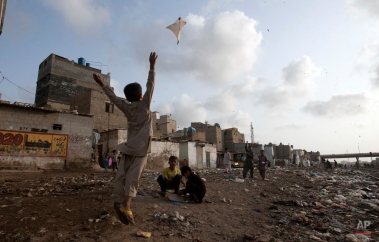 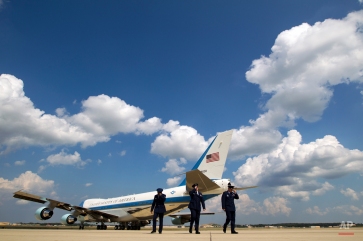 Military personnel hold their hats as Air Force One, with President Barack Obama aboard, departs from Andrews Air Force Base, Md., Monday, Aug. 24, 2015, en route to Las Vegas, Nev. where the the President will speak at the National Clean Energy Summit. (AP Photo/Jose Luis Magana)

Kenya’s Ezekiel Kemboi, centre, takes the water jump on his way to winning the gold medal in the menís 3000m steeplechase final at the World Athletics Championships at the Bird’s Nest stadium in Beijing, Monday, Aug. 24, 2015. (AP Photo/Andy Wong) 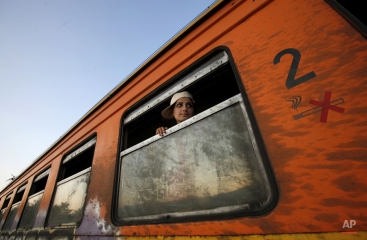 A young migrant woman from Syria looks from a window onboard a train towards Serbia, at the new transit center for migrants on the border with Greece, near southern Macedonian town of Gevgelija, on Monday, Aug. 24, 2015. Thousands of migrants have poured into Macedonia and board trains and busses that are taking them a step closer to the European Union. Police are letting the migrants pass across the border Monday, directing them to the new transit center for migrants near the border line. (AP Photo/Boris Grdanoski)

People cast their shadows against a cobble-stoned street, as they walk in Madrid’s Malasana neighbourhood, Spain, Monday, Aug. 24, 2015. The quarter, located in the Spanish capital city center, is a lively area full of restaurants, pubs and clothes shops. (AP Photo/Francisco Seco)