The arm of a dead migrant is seen at the waterfront of Zuwara, about 105 kilometers (65 miles) west of Tripoli, Libya, Friday, Aug. 28, 2015. Two ships went down Thursday off the western Libyan city, where Hussein Asheini of the Red Crescent said over 100 bodies had been recovered. About 100 people were rescued, according to the Office of the U.N. High Commissioner for Refugees, with at least 100 more believed to be missing. (AP Photo/Mohamed Ben Khalifa)

A group of migrants scan the border area from an abandoned military watch post by the border between Serbia and Hungary, near the village of Horgos, Serbia, Friday, Aug. 28, 2015. Record numbers of migrants fleeing violence and poverty in countries such as Syria, Afghanistan and Eritrea are trying to reach Europe this year, despite the risks of perilous sea crossings and little humanitarian assistance. (AP Photo/Darko Vojinovic) 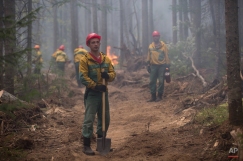 Firefighters extinguish flames from a wildfire near Turka in Siberia, Russia, Friday, Aug. 28, 2015. There are reports of spreading forest fires in Siberia. (AP Photo/Anna Ogorodnik)

An Indian boy looks outside a glass window damaged in alleged firing from the Pakistan side into a residential area at Sai village, in Ranbir Singh Pura near the India-Pakistan international border, about 40 kilometres (25 miles) from Jammu, India, Friday, Aug. 28, 2015. Indian and Pakistani border guards traded gunfire in the divided region of Kashmir, striking homes at villages near the disputed border region after midnight. (AP Photo/Channi Anand)

Indian women devotees stand in a queue as they wait to enter a temple near the Godavari River during Kumbh Mela, or Pitcher Festival, in Nasik, India, Friday, Aug. 28, 2015. Millions of Hindu pilgrims are expected to attend this year’s two-month festival, which began in mid-July and runs until the end of September. During the festival pilgrims take dips in the waters of a holy river as part of a ritual, believed to cleanse them of their sins. (AP Photo/Tsering Topgyal)

Britain’s Shara Proctor lands in the sand as she competes in the women’s long jump final at the World Athletics Championships at the Bird’s Nest stadium in Beijing, Friday, Aug. 28, 2015. (AP Photo/Wong Maye-E)

A Pakistani fisherman carries his catch on the coast of the Arabian sea, in Karachi, Pakistan, Friday, Aug. 28, 2015. (AP Photo/Shakil Adil)