A young migrant girl from Iraq looks into the camera as her family waits for the registration outside the main station in Munich, Germany, Tuesday, Sept. 1, 2015. Hundreds of migrants are arriving every day, after making perilous journeys through Europe. (AP Photo/Matthias Schrader)

Migrants are helped to board on the Norwegian Siem Pilot ship during a migrant search and rescue mission off the Libyan Coasts, Tuesday, Sept. 1, 2015. Four dead bodies and hundreds of migrants were transferred on the Norwegian Siem Pilot ship from an Italian Navy ship and a Doctor Without Borders vessels after being rescued in different operation in the mediterranean sea. (AP Photo/Gregorio Borgia)

A group of refugees walk on the railway tracks after crossing from Serbia, in Roszke, Hungary, Tuesday, Sept. 1, 2015. Migrants fearful of death at sea in overcrowded and flimsy boats have increasingly turned to using a land route towards Europe through the Western Balkans. (AP Photo/Darko Bandic)

Students carry a large Cuban flag in front of freshmen at Havana University in Havana, Cuba, Tuesday, Sept. 1, 2015. Cuban schools reopen every first of September for the start of the new school year, and hold a flag ceremony for new students. (AP Photo/Ramon Espinosa) 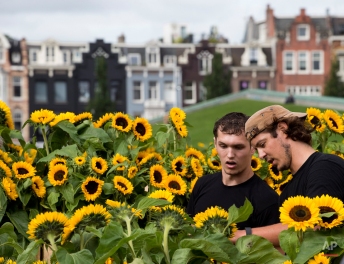 Workers construct a labyrinth with 125,000 sunflowers to mark the opening of the new entrance to the Van Gogh museum and the 125th anniversary of the Dutch master’s death, in Amsterdam, Netherlands, Tuesday, Sept. 1, 2015. (AP Photo/Peter Dejong) 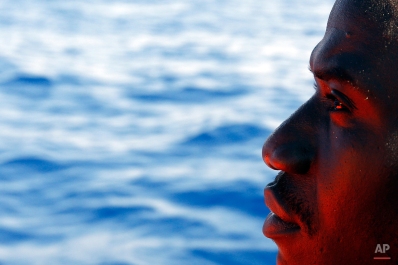 A migrants sits on a Norwegian Coast Guard boat after being transferred from the Italian Navy Ship Fulgosi during a migrant search and rescue mission off the Libyan Coasts, Tuesday, Sept. 1, 2015. Four dead bodies and hundreds of migrants were transferred on the Norwegian Siem Pilot ship from an Italian Navy ship and a Doctor Without Borders vessels after being rescued in different operation in the mediterranean sea. (AP Photo/Gregorio Borgia)

A kingfisher with a fish in its beak flies along a river bank in the village of Gorodok, 48 kilometers (30 miles) northwest of Minsk, Belarus, Tuesday, Sept. 1, 2015. (AP Photo/Sergei Grits)

Singapore’s opposition Workers’ Party supporters cheer on their candidates at a nomination center, Tuesday, Sept. 1, 2015, in Singapore. Singapore will hold a general election on Sept. 11, in what is expected to be a tight contest for the ruling party that has dominated politics in the city-state for 50 years but is now facing growing disaffection among citizens. (AP Photo/Wong Maye-E) 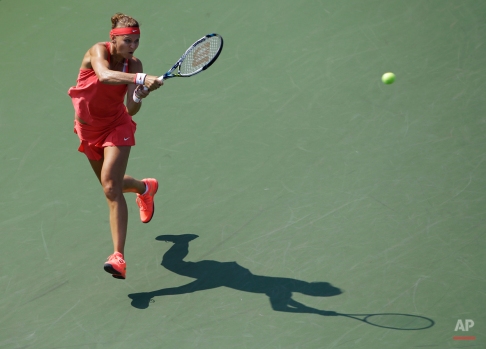 Lucie Safarova, of the Czech Republic, returns a shot to Lesia Tsurenko, of Ukraine, during the first round of the U.S. Open tennis tournament, Tuesday, Sept. 1, 2015, in New York. (AP Photo/Matt Rourke)