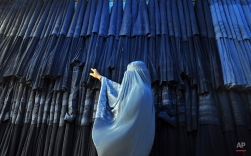 A woman clad in a burqa looks at other pieces of Afghanistan’s traditional, all-encompassing dress at a store in Mazar-i Sharif, north of Kabul, Afghanistan, Thursday, Sept. 10, 2015. (AP Photo/Mustafa Najafizada) 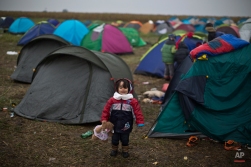 Syrian refugee child Jana Makkiyeh, 3, whose family comes from Damascus, Syria, holds a teddy bear while standing near her family’s tent at a makeshift camp for asylum seekers in Roszke, southern Hungary, Thursday, Sept. 10, 2015. Leaders of the United Nations refugee agency warned Tuesday that Hungary faces a bigger wave of 42,000 asylum seekers in the next 10 days and will need international help to provide shelter on its border, where newcomers already are complaining bitterly about being left to sleep in frigid fields. (AP Photo/Muhammed Muheisen)

A boy stands on the deck as the sun rises traveling from the northeastern Greek island of Lesbos to the Athens’ port of Piraeus, Thursday, Sept. 10, 2015. The social media-savvy among the migrants are constantly on their phones and they line up outside the offices of mobile providers to buy Greek numbers that allow data and roaming elsewhere in Europe to access social media and communicate with others. (AP Photo/Santi Palacios)

Spectators look at the players behind an image of the course at the 6th tee during the first round of the Evian Championship women’s golf tournament in Evian, eastern France, Thursday, Sept. 10, 2015. (AP Photo/Laurent Cipriani)

Tourists visit a garden during a hazy day in Singapore, Thursday, Sept. 10, 2015. Air pollution in Singapore reached its highest level in a year on Thursday as smog from Indonesian forest fires shrouded the island nation in a veil of gray, irking tourists and alarming authorities with hours left before general elections. (AP Photo/Ng Han Guan)

A model dresses as ghost to promote next month’s Halloween activities at Ocean Park where is a hot spot for tourists in Hong Kong, Thursday, Sept. 10, 2015. (AP Photo/Vincent Yu) 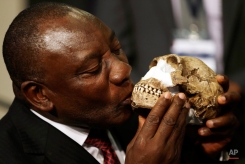 South Africa Deputy President Cyril Ramaphosa, kisses a reconstruction of Homo naledi’s face during the announcement made at Maropeng Cradle of Humankind in Magaliesburg, South Africa, Thursday, Sept. 10, 2015. Scientists say they’ve discovered a new member of the human family tree, revealed by a huge trove of bones in a barely accessible, pitch-dark chamber of a cave in South Africa. (AP Photo/Themba Hadebe) 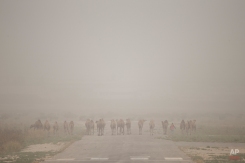 An Arab Israeli man walks with his camels on a closed air field during a sandstorm near the Arab town of Qalansuwa, Israel, Thursday, Sept. 10, 2015. The unseasonal sandstorm has swept across the Mideast, blanketing Beirut, Cairo and Damascus and causing the deaths of at least five people and sending hundreds of others to hospitals with breathing problems. (AP Photo/Ariel Schalit)