Nicaragua’s normally sleepy northern Caribbean coast in recent weeks has erupted in deadly clashes between Miskito Indians and settlers from the country’s west.

At least nine people were killed and 20 more wounded in September and hundreds of Miskito have fled their ancestral lands, in some cases seeking refuge in neighboring Honduras.

The conflict flared up when the Miskito took up arms to try to expel a wave of mestizo, or mixed-race, newcomers attracted in part by the area’s rich tropical hardwood groves. Some settlers have also clear-cut tropical forest for cattle ranching.

Miskito leaders call the settlers “colonists” and accuse them of forcibly seizing lands long considered communal property, helping themselves to food stocks and abusing the locals.

“Our people are going to (Honduras) because food is becoming scarce, there is no medicine. … The rice harvest is on our lands but we can’t go there because the colonists will kill us,” said community leader Lacio Rivas of Santa Fe, a tiny hamlet on the meandering Coco River that forms the border between the Central American nations.

The region is largely cut off from the rest of Nicaragua, with roads reaching only some towns. Villagers paddle waterways in dugout canoes, wash clothes in brooks and live in wood and corrugated-metal-roof shacks raised on stilts. According to official statistics, at least 70 percent of residents are in poverty.

Miskito men patrol the humid terrain in knee-high boots, most of them armed with crude weapons such as double-pronged fishing spears, knives, machetes, bows and arrows. But some carry rifles they say they seized from invaders. 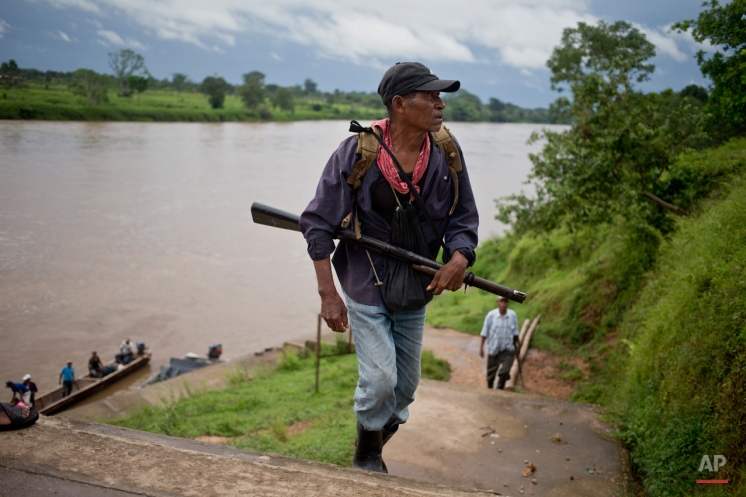 In this Sept. 19, 2015 photo, a Miskito man arrives after taking part in a defense patrol, in La Esperanza, Nicaragua. Miskito men who are resisting the arrival of settlers patrol the humid terrain wearing knee-high boots, and armed with crude weapons – double-pronged fishing spears, knives, machetes, bows and arrows. But some carry rifles they say they seized from invaders. (AP Photo/Esteban Felix)

As the conflict intensified, authorities said Indians torched settlements. The Miskito replied that police in the area shot at them.

“This is the fault of the colonists. We have been on our lands for thousands of years, and they come and they invade us. We ask them to leave, and they start shooting at us,” said Ambrosio Laicot, a villager from La Esperanza who lost his right eye in a clash. “They have no respect for our soul, so we don’t have any respect for them.”

Alex Fernandez, mayor of the river border city of Waspam, said he doesn’t have a precise count, but hundreds of people have left for Honduras.

Many more have settled elsewhere in Nicaragua. About 1,000 of the 2,400 people who were living in Francia Sirpi have left for Puerto Cabezas, the capital of the North Caribbean Coast Autonomous Region. At least 200 people have fled to Waspam.

Nicaragua’s Caribbean coast traditionally has been populated by three indigenous peoples — the Miskito, Mayagna and Rama — and the Afro-descendant Garifuna and Creole groups. They have been largely left alone in accordance with local custom and tradition, and autonomy laws bar the sale of communal lands.

President Daniel Ortega charges that corrupt individuals have “sold” such terrain to settlers from western Nicaragua, who don’t know or don’t care the titles are illegal.

“The con artists arrive and contact community leaders, give them some money and draw up paperwork, which has no validity, selling property to those who arrive from the Pacific” side of the country, Ortega said recently.

He has ordered an investigation. But some Miskito leaders allege that government officials with financial ties to lumber companies support the settlers.