People perform during a protest against the Brazilian mining company Vale, in Rio de Janeiro, Brazil, Monday, Nov. 16, 2015. The demonstrators demand that the company take responsibility for the damage caused by two dams that burst at its iron ore mine, that wiped out a village in the southeastern state of Minas Gerais. (AP Photo/Leo Correa)

The Cotopaxi volcano spewing ash and vapor, is seen from Quito, Ecuador, Monday, Nov. 16, 2015. The Cotopaxi began showing renewed activity in April and its last major eruption was in 1877. (AP Photo/Dolores Ochoa)

An Indian camel trader standing with a camel is silhouetted against the setting sun at the annual cattle fair in Pushkar, western Rajasthan state, India, Monday, Nov. 16, 2015. Pushkar is a popular Hindu pilgrimage spot that is also frequented by foreign tourists who come to the town for its annual cattle fair.(AP Photo/Deepak Sharma) 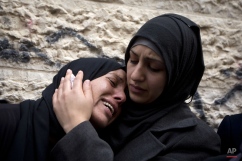 Palestinian women cry after taking the last look at the bodies of Ahmed Abu al-Aish, 28, and Laith Manasrah, 21, during their funeral, in the Qalandia refugee camp on the outskirts of the West Bank city of Ramallah, Monday, Nov. 16, 2015. Two Palestinians were killed and three wounded in clashes with Israeli troops early Monday in a Palestinian refugee camp in the Jerusalem area, a Palestinian health official said. The Israeli military said its troops entered Qalandia to demolish the home of a Palestinian who it says shot and killed an Israeli motorist in the West Bank this summer after he stopped to give the Palestinian directions to a nearby spring. (AP Photo/Majdi Mohammed)

First lady Michelle Obama dances to Gloria Estefan’s “Conga” in the Diplomatic Room of the White House in Washington, Monday, Nov. 16, 2015, during a Broadway at the White House event for high school students involved in performing arts programs. She is joined by Sergio Trujillo, Colombian dancer and choreographer, right, and Josh Segarra, left. (AP Photo/Carolyn Kaster) 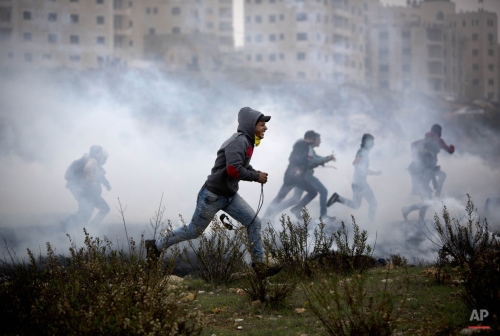 Palestinian protesters run for cover from tear gas fired by Israeli soldiers during clashes, after the funerals of Ahmed Abu al-Aish, 28, and Laith Manasrah, 21, from Qalandia refugee camp, in the West Bank city of Ramallah, Monday, Nov. 16, 2015. Two Palestinians were killed and three wounded in clashes with Israeli troops early Monday in a Palestinian refugee camp in the Jerusalem area, a Palestinian health official said. (AP Photo/Majdi Mohammed)

A Syrian man kisses his daughter shortly after disembarking from a dinghy at a beach on the Greek island of Lesbos after crossing the Aegean sea from the Turkish coast, Monday, Nov. 16, 2015. Greek authorities say 1,244 refugees and economic migrants have been rescued from frail craft in danger over the past three days in the Aegean Sea, as thousands continue to arrive on the Greek islands. (AP Photo/Santi Palacios)

A woman prays as they pay their respect in front of a floral tribute near the Bataclan concert hall after the terrorist attacks in Paris, Monday, Nov. 16, 2015. France is urging its European partners to move swiftly to boost intelligence sharing, fight arms trafficking and terror financing, and strengthen border security in the wake of the Paris attacks. (AP Photo/Daniel Ochoa de Olza)

Cuban migrants hold a sign that reads in Spanish “Ortega Nazi” in reference to Nicaragua’s President Daniel Ortega while another migrant holds one that reads “Liberty for a Cuban migrants” at the Costa Rican border with Nicaragua, in Penas Blancas, Monday, Nov. 16, 2015. More than 1 thousand Cuban migrants heading north to the United States tried to cross the border from Costa Rica into Nicaragua, causing tensions to soar between the neighbors as Nicaraguan security forces sought to turn them back. Following the thaw in relations between Washington and Havana, some Cubans have been making their way to Central America in hopes of then heading through Mexico and into the United States. (AP Photo/Esteban Felix)