The box containing the corpse of Saint Pio da Pietralcina is carried inside St. Peter’s Basilica at the Vatican, Friday, Feb. 5, 2016. Saint Pio is widely venerated in Italy and abroad. He is famous for bearing the stigmata, which are the marks of Christ, and was canonized by Pope John Paul II in 2002. He died on Sept. 23, 1968. (AP Photo/Alessandra Tarantino) 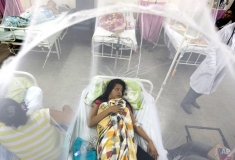 Protected by a mosquito net, Nadia Gonzalez recovers from a bout of dengue fever at a hospital in Luque, Paraguay Friday, Feb. 5, 2016. Dengue, like the Zika virus, is transmitted by the same vector, the Aedes aegypti mosquito. Zika was discovered in a Ugandan forest in 1947 and until last year, the virus had never caused serious disease. It has now spread to more than 20 countries. (AP Photo/Jorge Saenz) 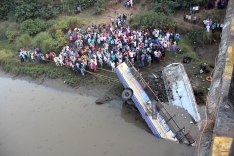 Locals gather in an attempt to rescue injured and recover bodies of passengers from the wreckage of the bus, in Navsari district of Indian state of Gujarat, Friday, Feb. 5, 2016. An official said the bus plunged off a bridge into the river below in western India, killing at least 25 people and injuring some 20 others. (AP Photo) 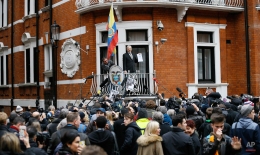 Wikileaks founder Julian Assange speaks on the balcony of the Ecuadorean Embassy in London, Friday, Feb. 5, 2016. A U.N. human rights panel says WikiLeaks founder Julian Assange, who has been squirreled away inside the Ecuadorean Embassy in London to avoid questioning by Swedish authorities about sexual misconduct allegations, has been “arbitrarily detained” by Britain and Sweden since December 2010. The U.N. Working Group on Arbitrary Detention said his detention should end and he should be entitled to compensation. (AP Photo/Kirsty Wigglesworth) 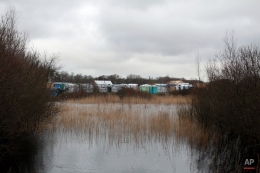 View of the migrant camp in Calais, northern of France, Friday, Feb. 5, 2016. About 4,000 people from Syria, Sudan and other countries are estimated to be camped out in Calais as they try to reach Britain, some recently moving into new facilities but most still sleeping in what’s been called Europe’s biggest slum. (AP Photo/Thibault Camus)

A collapsed crane lies along the street on Friday, Feb. 5, 2016, in New York. The crane landed across an intersection and stretched much of a block in the Tribeca neighborhood, about 10 blocks north of the World Trade Center. (AP Photo/Bebeto Matthews)

Armed, former members of Haiti’s disbanded army parade and patrol the streets while simultaneous pro- and anti-government protests take place in Port-au-Prince, Haiti, Friday, Feb. 5, 2016. At a different location, the soldiers later clashed with anti-government protesters, where a former soldier was beaten to death. Haitiís military was abolished in 1995 because of its history of toppling governments and crushing dissent. (AP Photo/Dieu Nalio Chery)

Slabs of beef hang from hooks inside a truck in Buenos Aires, Argentina, Friday, Feb. 5, 2016. Argentines are being advised to cut back on meat consumption as beef prices soar. According to Miguel Schiariti the head of the Argentine Beef Chamber of Commerce, the price hike is due to a large drop in the amount of cattle available in the market compared to six years ago. (AP Photo/Natacha Pisarenko) 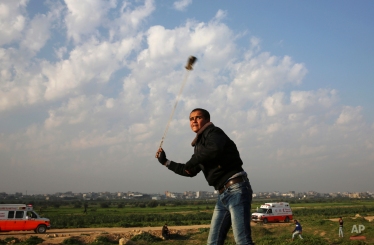 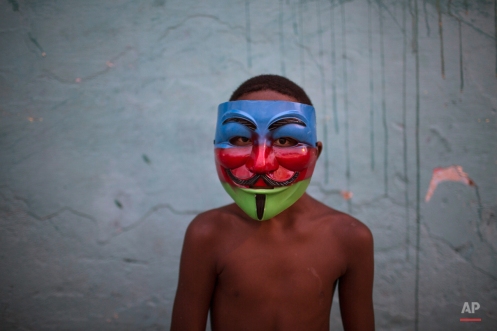 A youth wearing a carnival mask poses for a photo in a slum of Recife, Brazil, Friday, Feb. 5, 2016. Brazil has begun preparing for its pre-Lenten world famous festival that starts this weekend. (AP Photo/Felipe Dana) 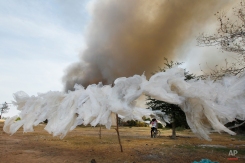 Cambodian boys sit on a bicycle near plastic bags as they watch smoke from a garbage dump at Kambol village on the outskirts of Phnom Penh, Cambodia, Friday, Feb. 5, 2016. (AP Photo/Heng Sinith)

Daniele da Silva, who is seven months pregnant, dries her son Gabriel outside their home in a slum of Recife, Brazil, Friday, Feb. 5, 2016. Daniele said she had Chikungunya a couple of months ago and her ultrasound scan and other exams of her baby are normal. The Aedes aegypti mosquito is known to transmit dengue, Chikungunya and Zika, and public health experts agree that the poor are more vulnerable because they often lack amenities that help diminish the risk. (AP Photo/Felipe Dana)

Althea LeBlanc, 9, jumps off a snow bank after a snow storm Friday, Feb. 5, 2016, in Derry, N.H. The storm was New Englandís biggest snowstorm so far this season, coming two weeks after a massive blizzard engulfed much of the Eastern Seaboard but largely spared Boston and points north. (AP Photo/David Goldman)

Los Angeles County Fire helicopter crews land at Angels Gate Park as rescue boats continue to search for wreckage from two small planes that collided in midair and plunged into the ocean off of Los Angeles harbor Friday, Feb. 5, 2016. There was no immediate word of any survivors, authorities said. The planes collided at around 3:30 p.m. and apparently went into the water about two miles outside the harbor entrance, U.S. Coast Guard and other officials said. (AP Photo/Damian Dovarganes)

A police officer takes a photo of a colleague in front of a mural of Pope Francis, depicted as a graffiti artist, during a security drill for the route the pontiff will take while in Mexico City, Friday, Feb. 5, 2016. Pope Francis will arrive in Mexico on Feb. 12 and visit several cities. (AP Photo/Dario Lopez-Mills)