The village elder put his shovel aside, stooped down by a scraggly bush and pulled a sack from the freshly turned dirt. Spreading open the sack, he reached in to reveal femurs, skull and jaw fragments, boots and a rusted green helmet.

“These are your American GIs,” Song Hong Ik said at a burial mound near the top of a small hill.

Perhaps they are. But for more than a decade, no one has been trying to find out.

“Until They Are Home” is one of the most sacred vows of the U.S. military, yet Washington has long suspended efforts to look for 5,300 American GIs missing in North Korea whose remains are potentially recoverable. The countries’ abysmal relations suggest that no restart is coming soon.

In the meantime, possible remains and recovery sites are being lost as North Korea works to improve its infrastructure with projects such as the Chongchon River No. 10 Hydroelectric Power Station. The bones Song revealed came from that project’s construction site.

His village, the hamlet of Ryongyon-ri, is nestled among low rolling hills in the heart of a Korean War battleground about 150 kilometers (almost 100 miles) north of Pyongyang. The 90-minute drive from the capital runs through mostly flat land covered by rice paddies or fields of corn and potatoes. The scene is quietly rustic. Farmers use oxcarts to transport produce and villagers can be seen walking in the distance on narrow dirt roads.

Not far from the highway that leads past the village, a shallow river runs through a wide valley. Song, polite but to the point, explained as he climbed the hill that the valley will be flooded when the dam is completed.

Song said construction on the plant, which involved a lot of digging, began in earnest four years ago.

That’s when the bones started piling up, he said. Enough, he added, to fill a half-dozen makeshift burial mounds on the hill, maybe 70 or 100 sets in all.

He dug up a few other mounds to make his point. Then, after a smoke break, he and the plant’s construction supervisor put the bones back in their bags and reburied them.

Between 1996 and 2005, joint U.S.-North Korea search teams conducted 33 joint recovery operations and recovered 229 sets of American remains. Washington broke them off because it claimed the safety of its searchers was not guaranteed. Critics of the program argued the North was using the deal to squeeze cash out of Washington — “bones for bucks,” they said.

Talks to restart recovery work resumed in 2011, only to fall apart after North Korea launched a rocket condemned by the U.S. as a banned test of ballistic missile technology. There has been no progress since.

With distrust between the two countries chronically high, it took months of requests before The Associated Press was allowed to go to Ryongyon-ri, first last May with a Korean People’s Army escort and again in December.

The AP made the requests because North Korea’s state-run media have repeatedly said — without giving details — that with construction, agricultural and other infrastructure projects going forward, time is running out for the U.S. military to collect its Korean War dead.

In Washington, such claims are often seen as a not-so-subtle jab at the U.S. government for halting the searches, or an effort to guilt the U.S. into formal talks it has refused to engage in as long as Pyongyang continues its nuclear weapons program.

Pyongyang’s approval of The AP’s visits to Ryongyon-ri may have had similar political motivations. That’s often how things work in North Korea, though an army official and villagers angrily denied that their reasons for allowing The AP to see the remains were anything other than humanitarian.

In any case, Washington isn’t biting. And its war dead are not being brought home.

More than 7,800 U.S. troops remain lost and unrecovered from the Korean War. About 5,300 were lost in North Korea.

According to the Pentagon’s Defense POW/MIA Accounting Agency, most died in major battles or as prisoners of war. Others died “along the wayside or in small villages” and many of the losses from aircraft crashes also occurred near battle zones or roads connecting them. “So,” it says, “it is possible that major concentrations of human remains are located in these areas.”

The DPAA lists Kujang County, where Ryongyon-ri is located, as part of a prime search area that could potentially yield 1,600 remains. The Chosin Reservoir, where another major campaign was fought, and POW camp burial grounds near the Chinese border are also priority sites.

“The Department of Defense is committed to achieving the fullest possible accounting,” Lt. Col. Holly Slaughter, a DPAA spokeswoman, told The AP. “U.S. efforts to recover Korean War remains are a humanitarian effort for our missing servicemen, their families and the American people.”

Even so, Maj. Natasha Waggoner, another spokeswoman for the agency, said there is no schedule “at this time” to hold talks to send any search teams back.

In this March. 15, 2016, image made from video, Larry Kinard, president of the Korean War Veterans Association is interviewed by the Associated Press in Mansfield, Texas. (AP Photo/APTN) 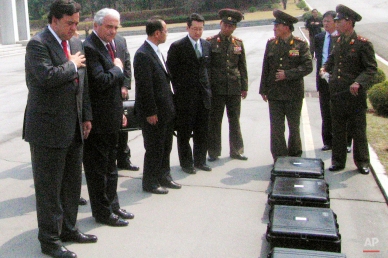 In this April 11, 2007 photo, New Mexico Gov. Bill Richardson, left, and Anthony Principi, former U.S. veterans affairs secretary, second from left, pay respects to the remains of six American soldiers from the Korean War inside of black cases on North Korea’s side of the border village of Panmunjom. (AP Photo/Foster Klug)

Until they do, the jury will remain out on the Ryongyon-ri remains.

It’s impossible to judge the veracity of remains simply by looking at them. Only expert eyes and a long and difficult forensic identification process can do that. There were no dogtags, unit insignia or other identification clues mixed in with the remains seen by The AP.

Villagers acknowledged the remains were gathered haphazardly as construction progressed. It is quite possible, they said, the remains could include animal bones or the remains of combatants from other countries.

Villagers old enough to have witnessed the battle have sketchy memories, at best.

By the time the fighting came to their backyard, from mid-November to December 1950, most of the village, a scattering of about 30 households, had already been evacuated. Those who remained were mostly women, children and old people. The village was then known as Sangpyong.

“My aunt, uncle and grandfather were caught by the U.S. enemies, who beat them so they got sick and died,” said Kim Ri Jun, who was then 13 years old.

Kim and Song had no information about specific units the troops were attached to. They did remember that many U.S. soldiers were African-American, and that troops from other countries, taking part in U.S.-led United Nations forces, were involved in the fighting as well.

The location and timeframe coincide with a major clash between the U.S. and its allies and the Chinese “volunteer” forces fighting on Pyongyang’s side. The push north was known as the “Home by Christmas” campaign because Gen. Douglas MacArthur thought the war would be won by Christmas. Instead, it would last two and a half more years, end in a stalemate and claim 36,500 American lives.

The U.S. government has estimated as many as 270 sets of American remains are likely recoverable in Kujang County alone. Searching for them was one of the top priorities when the U.S. missions were still going to North Korea. Nearly a dozen joint searches were conducted in the area from 1998-2000.

But they ended long before the real digging in Ryongyon-ri began.

That any joint searches were held at all was almost miraculous. That they would break down seems much more predictable.

North Korea and the United States remain technically at war because the 1950-53 fighting ended with an armistice, not a peace treaty. Remains recovery is the only project their militaries have ever worked on together.

Relations were much better when the missions began.

Under President Bill Clinton, the two countries had signed an agreement for the North to freeze its illicit plutonium weapons program in exchange for aid. But that deal unraveled in 2002, the same year President George W. Bush declared North Korea part of the “axis of evil.” The searches continued for a few more years, but bilateral relations took a nosedive. North Korea conducted its first nuclear test in 2006 and meaningful contact between the two countries has since been minimal.

Slaughter, of the DPAA, said the total cost to the U.S. to carry out the joint missions was $19.5 million. Of the 229 remains recovered, 110 have been identified. The recovery of remains has since ground to a halt — to only six, all unilaterally handed over to the U.S. by Pyongyang in 2007.

The impasse on a humanitarian — not political — issue doesn’t sit well with some Korean War veterans.

“Those of us who fought there really feel it’s a travesty that we haven’t been able to get there and try to find those that were killed or died in the prison camps,” said Larry Kinard, who fought in Korea with the Army’s 3rd Infantry Division and is now president of the 15,000-member Korean War Veterans Association. He noted that since 1982 only 332 Korean War remains have been identified and accounted for.

Kinard told the AP from his home in Texas he is in regular contact with the DPAA and feels it is doing the best it can with limited resources and the challenges it faces of getting into North Korea to conduct searches.

But he added that is of little consolation to the families of the missing.

“Approximately 5,300 of our comrades still lie in the ground in North Korea and little or no effort is currently underway to recover them,” he said. “The KWVA members, who average nearly 85 years old, want to see their fellow brothers-in-arms found, identified, brought home, and laid to rest in our country.”

Song, meanwhile, said he had mixed feelings about gathering the bones of his enemy and moving them to the hill so that they wouldn’t be lost when the valley is flooded.

“Frankly, I don’t care if the Americans come or not,” he said. “But they owe us a thank you for taking care of their dead.”

Text from the AP news story, AP EXCLUSIVE: US remains in N. Korea lost in political limbo, by Eric Talmadge.