After the destruction wreaked on archaeological sites by Islamic State group, the collections at the Iraq’s National Museum in Baghdad have become even more important. It’s now one of the only places you can find relics from the ancient cities that fell into the extremists’ hands.

As many as 4,000 archaeological sites are still under the domination of IS and around 100 sites have been destroyed, according to Iraqi Culture Minister Firyad Rwandzi. The sites in their grip show the multiple civilizations that rose and fell during Iraq’s history, ranging from mosques, churches and small shrines to large sites of old cities.

Among the most significant ancient sites the militants captured were several capitals of the Assyrian Empire during its height between the 10th and 6th centuries B.C. — sites known as Nimrud and Khorsabad — as well as Hatra, a well-preserved Roman-era city of temples. Videos put out by the Islamic State group showed its militants blowing up or smashing relics and structures at the sites. 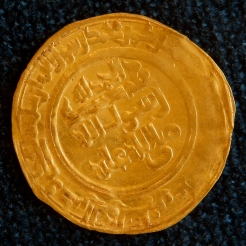 A coin dating back to the Umayyad era is displayed at the Iraqi National Museum in Baghdad, Iraq, Monday, April 4, 2013. (AP Photo/Hadi Mizban)

A statue found in the Sun City of Urban Civilization in Mosul is displayed at the Iraqi National Museum in Baghdad, Monday, April 4, 2013. (AP Photo/Hadi Mizban) 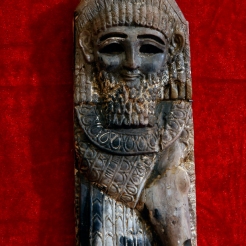 In this Wednesday, April 3, 2013 photo, a statue from the Kingdom of Nimrod from the ninth century B.C. is displayed at the Iraqi National Museum in Baghdad, Iraq. (AP Photo/Hadi Mizban)

In this picture taken on Tuesday, April 2, 2013, Alabaster figurines of mother – goddess tell Es-Sawwan, belonging to the 6th millennium B.C. is displayed at the Iraqi National Museum in Baghdad, Iraq. (AP Photo/Hadi Mizban)

In this picture taken on Tuesday, April 2, 2013, a carved stone Vessel found in the Ur area from the early 3rd millennium B.C. is displayed at the Iraqi National Museum in Baghdad, Iraq. (AP Photo/Hadi Mizban) 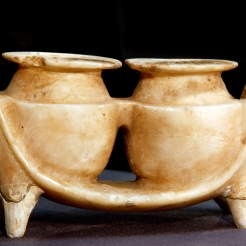 In this picture taken on Tuesday, April 2, 2013, a cosmetic container carved from stone, found near Ur is displayed at the Iraqi National Museum in Baghdad, Iraq. (AP Photo/Hadi Mizban)

But some of the relics from those sites had been moved long ago to the National Museum. In its Assyrian Hall tower two great winged bulls with human heads, protective deities known as Lamassu, framing a statue from the temple of Nabu, the god of wisdom. Along the walls run bas-reliefs from the palace of King Sargon in Khorsabad.

Rwandzi said museums are more important than ever. “A nation without a museum is like a human without eyes,” he said.

Here is a series of photos of the museum’s halls and relics by Associated Press photographers.

Text from the AP news story, AP PHOTOS: Iraqi museum refuge for relics of the past.

2 thoughts on “Iraqi Museum Refuge for Relics of the Past”