Blood stained glass and a photograph of the Hindu goddess Durga is seen near the spot where three motorcycle-riding assailants hacked student activist Nazimuddin Samad to death while walking with a friend, in Dhaka, Bangladesh, Thursday, April 7, 2016. Police suspect 28-year-old Samad was targeted for his outspoken atheism in the Muslim majority country and for supporting a 2013 movement demanding capital punishment for war crimes involving the country’s independence war against Pakistan in 1971, according to Dhaka Metropolitan Police Assistant Commissioner Nurul Amin. (AP Photo) 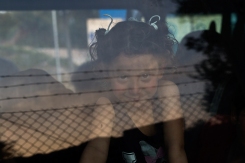 A girl looks out from a window in a mini bus as she arrives with her family to Karatepe municipality camp for refugees, on the Greek island of Lesbos, Thursday April 7, 2016. 135 refugees and migrants have been transferred Thursday to the camp from Moria detention center which hosts families and vulnerable people. (AP Photo/Petros Giannakouris) 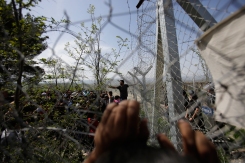 Migrants try to tear down part of border fence separating Greece with Macedonia, at the northern Greek border point of Idomeni, Greece, Thursday, April 7, 2016, during a protest against the closed border. When the migrants tried to tear down part of the fence, Macedonian police stepped in and stopped them. (AP Photo/Amel Emric)

Pro-government supporters attend rally in support of President Rafael Correa, in Quito, Ecuador, Thursday, April 7, 2016. The government and opposition called for demonstrations, for and against, the financial measures proposed by the the administration of President Correa to deal with the economic downturn caused by the slump in oil prices. (AP Photo/Dolores Ochoa)

University of Texas students embrace during a gathering for fellow student Haruka Weiser on campus Thursday, April 7, 2016, in Austin, Texas. Weiser a first-year dance student from Oregon, was last seen leaving a university drama building Sunday night. Her body was discovered in a creek in the heart of the university’s Austin campus on Tuesday. (AP Photo/Eric Gay)

A roadside ice-cream vendor waits for customers at a market in New Delhi, India, Thursday, April 7, 2016. The Indian economy is characterized by the existence of a vast majority of informal or unorganized labor employment. (AP Photo/Altaf Qadri) 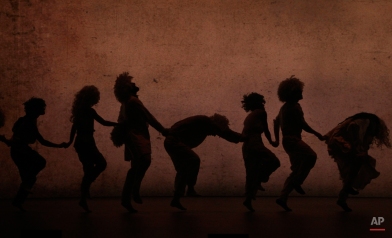 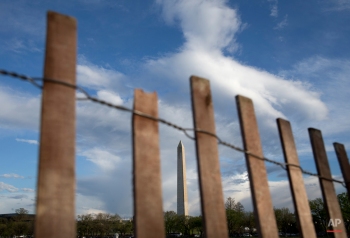 The Washington Monument is seen through a fence lining the Ellipse, in Washington, Thursday, April 7, 2016. (AP Photo/Carolyn Kaster)

Members of the Presidential Security Group band wait for the arrival of Prince Albert II of Monaco at the Malacanang Presidential palace in Manila, Philippines on Thursday, April 7, 2016. (AP Photo/Aaron Favila)

Kashmiri Muslims climb trees to watch the funeral procession of Waseem Malla, a suspected militant of Hizbul Mujahideen, in Pehlipora, some 60 kilometers (35 miles) south of Srinagar, Indian controlled Kashmir, Thursday, April 7, 2016. Anti-India protesters attacked government forces with rocks and burned an armored vehicle Thursday as they participated in the funerals of two insurgents killed in a gunbattle in the disputed Kashmir region, an Indian official said. (AP Photo/Dar Yasin)

A member of a Chinese honor guard is covered by a red flag as he waits for the arrival of Sri Lanka’s Prime Minister Ranil Wickremesinghe during a welcome ceremony outside the Great Hall of the People in Beijing, Thursday, April 7, 2016. (AP Photo/Andy Wong)

Washington Capitals goalie Braden Holtby (70) skates in front of the goal before an NHL hockey game against the Pittsburgh Penguins, Thursday, April 7, 2016, in Washington. The Penguins won 4-3 in overtime. (AP Photo/Alex Brandon) 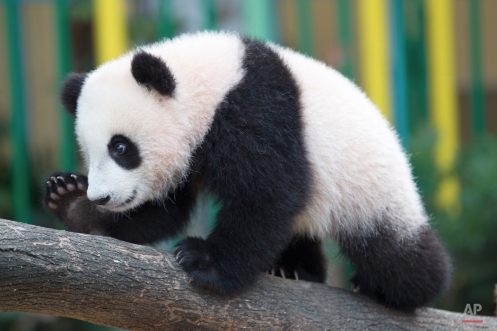