Queen Elizabeth II marks her 90th birthday on Thursday as Britons and many throughout the world celebrate her long and dignified reign. She will celebrate again in June with national events to mark her official birthday.

Here are answers to some questions about the queen’s extraordinary life and times:

WHY TWO BIRTHDAYS A YEAR? ISN’T ONE ENOUGH? 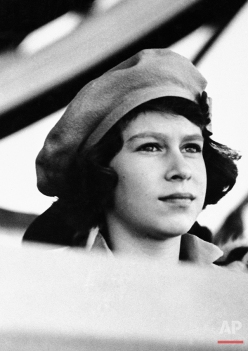 Her Royal Highness Princess Elizabeth Alexander Mary, eldest child of the King and Queen of England, is 16-years-old on April 7, 1942. Like thousands of other children, the Princess will probably observe the occasion quietly “somewhere in the country.” Since the war, she has been knitting garments for the poor, contributing funds to purchase cigarettes for the armed forces and attending dances and armed forces and attending dances and programs of evacuated children. Other years it was different. In 1937 Princess in review at Portsmouth, spoke over the radio and appeared at public functions. When her parents toured American in 1939 she had the time of her life. She was appointed recently a colonel in the Grenadier Guards. (AP Photo)

It may seem excessive, but the British monarch celebrates his or her birthday twice a year, once on the actual day (for Elizabeth, April 21), and once in early June, when the event can be marked with the gala Trooping the Color parade in central London. The June date is chosen in part because the famously fickle British weather just might produce a few sunny hours at that time of year. And the Buckingham Gardens are gloriously in bloom. 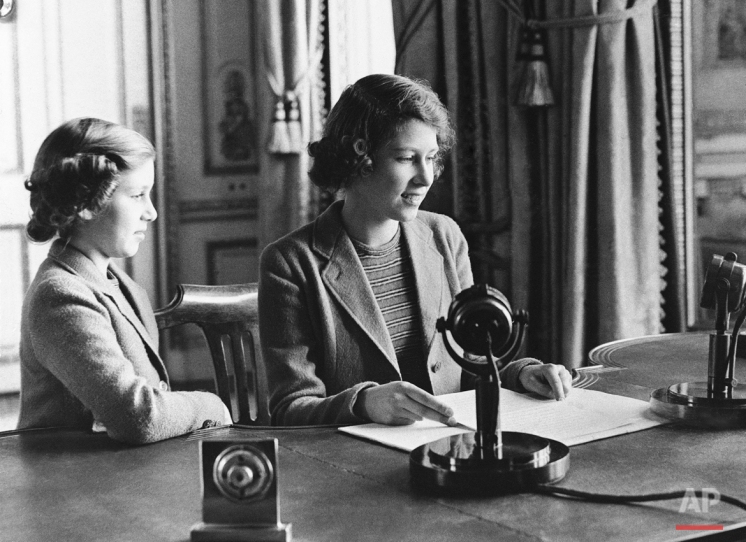 Performing one of the many public duties she will be called on, as a member of the Royal House, to fulfill as she grows older, Princess Elizabeth, center, 11-year-old heiress apparent to the British throne, is shown as she made her rapid debut, broadcasting a three-minute speech to British girls and boys evacuated overseas, Oct. 22, 1940, London. She is joined in bidding good-night to her listeners by her sister, Princess Margaret Rose.

Elizabeth was a young princess during World War II, and her father King George VI was concerned for her safety as London came under the repeated German bombing raids known as The Blitz. She and her sister Princess Margaret were moved to Windsor Castle, 25 miles (40 kilometers) west of London for security reasons. She later persuaded her parents to let her serve in the Auxiliary Transport Service, where she learned how to drive and repair ambulances and trucks as part of the war effort. She was assigned number 230873 while in the service.

WHEN DID SHE BECOME QUEEN?

This is a June. 2, 1953 photo of Britain’s Queen Elizabeth II and Prince Philip, Duke of Edinburgh, as they wave to supporters from the balcony at Buckingham Palace, following her coronation at Westminster Abbey, London. (AP Photo/Leslie Priest) 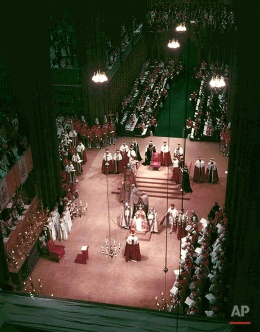 Elizabeth’s life was changed forever in 1936 when her uncle, King Edward VIII, abdicated so he could marry his divorced lover Wallis Simpson. This made her father the king and Elizabeth heir to the throne. King George VI’s health failed, however, and he was too ill for a planned tour of the Commonwealth in 1952, so he sent Elizabeth and her husband, Prince Philip, in his place. They were staying in a remote part of Kenya on Feb. 6, 1952, when she was told that the king had died. She automatically became queen upon her father’s death, although the official coronation did not take place for more than a year.

HAS THE QUEEN EVER COMPLAINED IN PUBLIC?

Hours after the major fire started flames continued to rise over Windsor Castle, causing millions of pounds of damage. Windsor Castle 20 miles west of London is used by Britain’s Queen Elizabeth II as a weekend home and contains many historic works of art. (AP Photo/Denis Paquin) 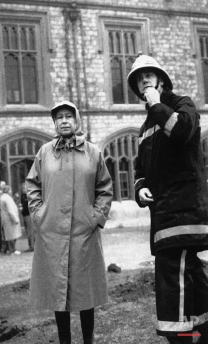 Britain’s Queen Elizabeth II inspects the ruins left by a fire in Windsor Castle on Saturday, Nov. 21, 1992 in Windsor, England with an unidentified fireman. The fire was still smouldering Saturday 24 hours after it started in an area of the castle and caused millions of pounds worth of damage. (AP Photo/pool/Press Association)

No, that’s just not done. The closest Elizabeth has come to exhibiting human frailty to her subjects was in 1992, when she made a rare admission that her life, so picture perfect on the outside, was marred by the marital woes of three of her four children. She didn’t complain in English, however, looking to Latin to proclaim it had been something of an “annus horribilus” — a horrible year that included a disastrous fire at her beloved Windsor Castle.

WHAT WAS THE LOW POINT OF HER MONARCHY?

Britain’s Queen Elizabeth II looks through a window, during a visit to the new Coca Cola factory, which she officially opened, in Lisburn, Northern Ireland, Friday, Oct. 22, 2010. (AP Photo/Peter Morrison)

This would undoubtedly be the stormy days that followed Princess Diana’s sudden death in a car crash in September, 1997. The princess was tremendously popular, and many held the royal family responsible for her unpleasant divorce from Prince Charles. The queen was castigated in the press for not returning to London immediately after Diana’s death and for not flying the royal standard atop the palace at half-staff as a sign of respect. Thousands of mourners placed flowers at the gates of Kensington Palace, Diana’s residence, and many complained the queen was insensitive and out of touch.

WHO WAS HER FAVORITE PRIME MINISTER?

British Prime Minister Sir Winston Churchill, wearing knee breeches, garter and garter sash, holds car door for Queen Elizabeth II after being host at a farewell dinner at No. 10 Downing Street in London on April 5, 1955, for his Queen and for leaders in the country’s political circles. It is believed that Churchill will step down as prime minister and that he will be succeeded by his protege, Sir Anthony Eden, now foreign secretary. (AP Photo/ROTA) 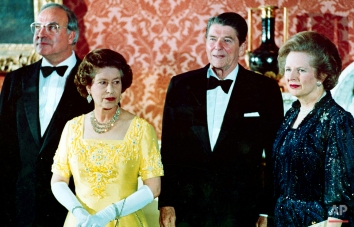 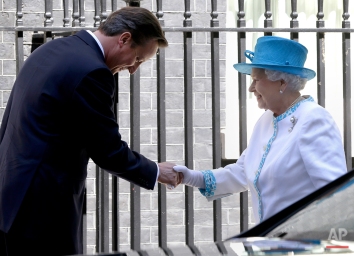 You’d have to ask her. And she won’t tell.

DOES THE QUEEN PLAN TO RETIRE? 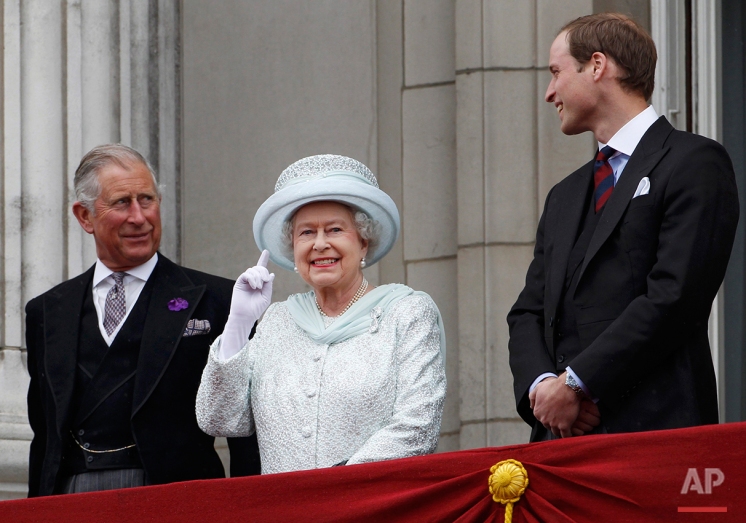 Britain’s Prince Charles, Britain’s Queen Elizabeth II and Prince William stand on the balcony at Buckingham Palace during the Diamond Jubilee celebrations in central London Tuesday June 5, 2012. Four days of nationwide celebrations during which millions of people have turned out to mark the Queen’s Diamond Jubilee conclude on Tuesday with a church service and carriage procession through central London. (AP Photo/Stefan Wermuth, Pool)

The strong-willed and able-bodied queen has given no indication she plans to leave the throne, and has described her unique position as a “job for life.” Her own mother lived to be 101, and was generally in fine fettle in her final years. Still, it is possible Elizabeth would step down if she developed severe problems that made it impossible for her to carry out her role.

PRINCE CHARLES IS ALREADY 67. COULD THE QUEEN ARRANGE THINGS SO GRANDSON PRINCE WILLIAM WOULD SUCCEED HER?

No. This is a constitutional monarchy, with rules of succession.

Below is a selection of photos from The Associated Press’ archive featuring Queen Elizabeth II through the years.

Text from the AP news story, Queen Elizabeth II at 90: A look at highs, lows of her reign, by Gregory Katz.