AP photographer and Rio native, Felipe Dana, sheds light on the realities of life in the Olympic host city.

Not far from Rio’s posh Ipanema and Copacabana districts, narrow pathways lead to grim slums where poverty, drug gangs and young men with assault rifles dominate life for hundreds of thousands of residents.

Bullet-riddled bodies lie in pools of blood, and gun-toting teens in flip-flops navigate the maze of alleys working as guards, lookouts and distributors for drug lords operating just a few miles (kilometers) from where hundreds of thousands and tourists and athletes will be for the Aug. 5-21 Olympic Games.

“In these communities you can see what real life is like. This is our reality,” said a drug trafficker who spoke to The Associated Press on the condition that his identity and location not be revealed.

Holding an AK-47, the masked drug boss said dealers win the hearts and minds of locals by paying for food and medicine, providing a lifeline for many living in crushing poverty.

Gruesome scenes of death and impunity play out daily in Rio’s hundreds of shantytowns, known as favelas.

On the roof of a cable car station, a half dozen police officers with assault weapons hunkered down behind low concrete walls to shoot it out with suspected drug traffickers in broad daylight in a sprawling cluster of slums known as Complexo do Alemao. When the gunfire stopped, schoolchildren casually walked by as officers frisked drivers.

Elsewhere, a man was dragged from his house and shot dead, his bloody body left at the front door. A teenage boy was executed with his hands bound on a street that divides the territories of two rival gangs. A woman who was a candidate for a local council seat was shot to death at a bar near her house.

Some residents do what they can to show a different way. Pastor Nilton, a preacher who was once a former drug trafficker, holds prayer services in gang-ruled slums.

Nilton tries to persuade teenage boys to give up the gang life. Youths sometimes put their weapons down — but usually it’s only long enough to receive his blessing. 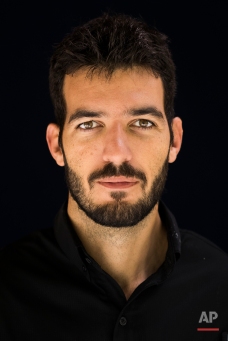 This July 13, 2016 photo shows a crime scene at the entrance of a home in Nova Iguacu, greater Rio de Janeiro. The man who lived there with his family was removed by gunmen and killed on the spot. Police believe the killing was a gang hit related to a change of leadership in the area. On the eve of hosting the world’s largest sporting event, Rio’s decade-long push to curb violence in hundreds of slums appears to be crumbling. Overall murders are on the rise in the first half of 2016. (AP Photo/Felipe Dana)

Below, Felipe Dana recounts his experience photographing the violence in Rio’s slums.

I was born and raised in Rio de Janeiro, so I’ve been exposed to this city’s endemic violence since I was a kid.

But it wasn’t until I became a journalist and started spending lots of time in the slums that most Rio residents from outside those areas never see that I was exposed to the real scope of the violence here and started to understand the toll it takes on people’s lives.

The so-called “police pacification” program, which was meant to solve Rio’s violence problem by bringing police to slums that had been dominated for decades by heavily armed drug gangs, started around when I joined The Associated Press, in 2009.

At first, I was really hopeful about the program. And at first, it really seemed to be working. I was able to go into slums that I wouldn’t have been able to enter without the permission of the gangs that control the area.

But that’s not the case anymore. The improvement was fleeting. The program expanded quickly and the police weren’t able to maintain enough officers in the pacified slums to keep control of the area. Also, the promise that other government services like sewage, garbage collection, schools and health clinics would be follow the police were never kept.

If anything, the situation in many slums is worse than before the pacification, and certainly more confusing. It used to be that you at least knew who was in charge of a certain patch of turf. Now, even in slums where the police are still present, they aren’t really in control. Now the drug dealers are again in plain sight. Teenagers openly toting assault weapons are a common sight. And you don’t know when someone might open fire.

And stuck right in the middle of it, you’ve got the residents of the slums, 99 percent of whom are honest, hardworking people who have nothing to do with the gangs. But they’re caught in the crossfire, victims of what in Portuguese we call “balas perdidas,” which literally translates as “lost bullets.”

In Rio these days, we’re constantly hearing about people being maimed and killed by these so-called lost bullets: housewives, teenage girls, little kids felled as they play in front of their homes.

It’s out of control.

On one Friday night, I saw the bodies of eight people who had been murdered across the Baixada Fluminense, the poor suburbs north of Rio where many of the gangs that were pushed out of slums in the city’s rich South Zone migrated after the start of the pacification program. That kind of death toll is not unusual in that area. An officer told me that police in the area were recently called to the scene of 19 murders in a single night.

This project to document the reality of Rio’s slums today grew out of the work that I’ve been doing in many slums for the past seven years. I drew on contacts to help me get into places journalists rarely get access to. Often working throughout the night, I spent months visiting more than 10 slums throughout greater Rio.

When you’re driving through certain parts of the city at night, the threat of violence is palpable. In the Baixada Fluminese, for example, the streets are empty and there’s barely any police presence.

I had some close calls. Once, in the Alemao slum complex, I was following police officers who came under intense fire. I spent several minutes spread-eagle on the ground before I was able to crawl to cover. Another time, I was finishing up a day of work in the North Zone of when the car in front of me screeched to a halt and armed guys got out and ordered us to hand over the keys to the car. They kept asking if we were police officers, as they kept their weapons trained on us.

But the reality is that during the Olympics, Rio will probably be very safe _ at least for the foreign visitors. There will be soldiers and lots of elite forces everywhere. Plus many of the traffickers told me they won’t be looking for conflict. They said they would lay low unless police invade their areas. It’s a bad time to pick a fight, and they are aware of that. So unless something extraordinary happens, violence shouldn’t be a big problem during the games.

But the real problem for all Rio residents, and especially all the people who live in slums, will come after Olympics. The troops will go home and innocent people will again find themselves caught in the crossfire.