Indians paddle their canoes as the sun sets at the Hussain Sagar Lake in Hyderabad, India, Friday, Jan. 2, 2015. The lake promenade is a busy thoroughfare that provides boating and other water sports facilities. (AP Photo/Mahesh Kumar A.)

A tourist, left, grimaces as a street entertainer places her doves on him for his friend to photograph, in Madrid, Spain, Friday, Jan. 2, 2015. (AP Photo/Andres Kudacki)

A man prays a day before Moulid, which commemorates the birth of Prophet Muhammad, the central figure of the Islamic religion, at a mosque in Cairo, Egypt, Friday, Jan. 2, 2015. Every year, Egyptians celebrate Moulid by performing ritual dances and prayers and spending time with their families. (AP Photo/Nariman El-Mofty)

An Indian villager warms himself near a bonfire on a cold morning in Saifai village, in the northern Indian state of Uttar Pradesh, Friday, Jan. 2, 2015. (AP Photo/ Rajesh Kumar Singh)

A masked Palestinian man uses a slingshot during clashes with Israeli soldiers outside the Ofer military prison near the West Bank city of Ramallah on Friday, Jan. 2, 2015. (AP Photo/Majdi Mohammed) 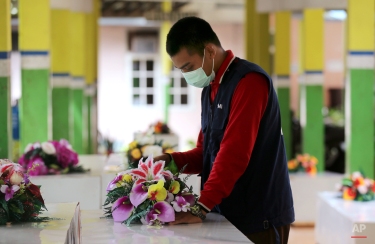 A member of the Indonesia Red Cross prepares coffins for the victims of AirAsia Flight 8501 at the main hospital in Pangkalan Bun, Indonesia, Friday, Jan. 2, 2015. More ships arrived Friday with sensitive equipment to hunt for the fuselage of the flight and the more than 145 people still missing since it crashed into the sea five days ago. (AP Photo/Tatan Syuflana)

A Pakistani child who was displaced with his family from tribal areas lies next to his grandfather sleeping on a piece of wood next to his second hand clothes displayed for sale on a roadside in the outskirts of Islamabad, Pakistan, Friday, Jan. 2, 2015. (AP Photo/Muhammed Muheisen)