Russian soldiers dressed in Red Army World War II uniform attend a rehearsal for the Nov. 7 parade in the Red Square with St. Basil Cathedral, left, and Spassky Tower and the Kremlin in the background, in Moscow, Russia, Friday, Nov. 06, 2015. The parade marks the 74th anniversary of a Nov. 7 parade on Red Square when soldiers went directly to the front during World War II. For decades Nov. 7 was a holiday celebrating the 1917 Bolshevik Revolution. (AP Photo/Ivan Sekretarev)

A man touches his forehead holding a candle outside the Colectiv nightclub in Bucharest, Romania, Friday, Nov. 6, 2015, as people mark one week since a deadly fire started during a concert. Romanian prosecutors on Friday questioned an owner of the nightclub where a fire killed 32 people and injured 180. (AP Photo/Vadim Ghirda)

A horse struggles in the mud at the small town of Bento Rodrigues after a dam burst on Thursday in Minas Gerais state, Brazil, Friday, Nov. 6, 2015. Brazilian rescuers searched feverishly Friday for possible survivors after two dams burst at an iron ore mine in a southeastern mountainous area. (AP Photo/Felipe Dana) 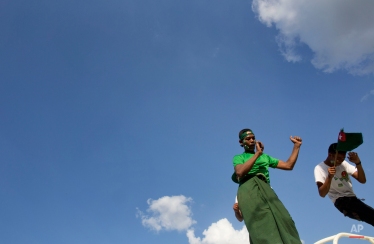 Supporters of Myanmarís military backed Union Solidarity and Development Party (USDP) dance atop a vehicle during an election campaign event in Yangon, Myanmar, Friday, Nov. 6, 2015. On Sunday Myanmar will hold what is being viewed as the country’s best chance for a free and credible election in a quarter of a century.(AP Photo/ Gemunu Amarasinghe)

A woman holds a child as they wait to board a ferry at the port of Mytilene on the island of Lesbos, Greece, Friday, Nov. 6, 2015. Thousands of migrants and refugees were allowed to board vessels in Mytilene on Friday, as Greek ferries ended a strike that had left them trapped on eastern Aegean islands. (AP Photo/Marko Drobnjakovic)

A group of Afghan refugees warm themselves near a fire at at the railway station of Sid, Serbia, where Serbian authorities send them to Croatia, Friday, Nov. 6, 2015 (AP/Manu Brabo)